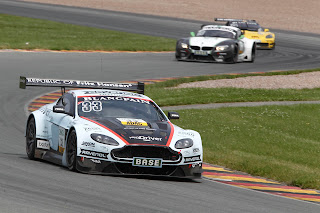 
Denmark's Dynamic Duo: The Danish pairing of Kristian Poulsen (36) and Christoffer Nygaard (26 / Young Driver AMR) surprised everyone at the Sachsenring by chalking up a first ADAC GT Masters victory for the new Aston Martin V12 Vantage. At the end of a thrilling final lap with only 1.4 seconds separating the front three as they crossed the line, the Audi R8 of Christopher Mies (23, Heiligenhaus) and Edward Sandström (33, S / Prosperia uhc speed) finished second. Making a big impression on their debut in the 'Super Sports Car League' were third-placed Formula 2 champion Mirko Bortolotti (22, I) and Abdulaziz Al Faisal (29, KSA) in a BMW Z4. "Incredible! Hats off to Kristian for holding out against the massive pressure from behind on those last few laps," said an appreciative Nygaard.

Sunday's race was full of excitement right from the first corner. Pole-sitter Daniel Keilwitz (22, Villingen / Callaway Competition) immediately took the lead, with Dominik Schwager (35, Munich / Schubert Motorsport) in a BMW Z4 and Maxime Martin (26, B / ALPINA) in a BMW ALPINA in hot pursuit. Schwager was less than a second behind Keilwitz for the first quarter of the race but lost all hope of victory when he received a drive-through penalty for an infringement at the start. Third-placed Maxime Martin (Belgium) also ran out of luck when he had to make an unscheduled pit stop due to a puncture.

Keilwitz handed over to Diego Alessi (40, Italy) at the compulsory pit stop, but in the process lost three seconds on the competition and, as a result, the race lead. Kristian Poulsen, who had waited until just before the end of the pit stop window before swapping with Christoffer Nygaard in the Aston Martin, now found himself out in front. Thanks to some great driving in the first stint, Nygaard had steadily worked his way up the field. Poulsen continued in the same vein throughout the second half of the race and managed to hold off his pursuers, Edward Sandström in the Audi R8 and Mirko Bortolotti in the BMW Z4. Not only did Poulsen win the race but also the amateur classification. Indeed, this was the first time in the history of the ADAC GT Masters, that an amateur driver has claimed overall victory. A delighted Poulsen said: "I had trouble with the clutch as well as with second and third gear on the first few laps after the pit stop. I was a bit worried at the time, but the problems suddenly disappeared after five laps. I would never have believed we could win here." Nygaard was equally jubilant: "I wasn't too sure which position I was in just before the pit stop. When I saw the pit board showing 1st place, I could hardly believe my eyes!"

Alessi crossed the finish line in fourth place, and in doing so, increased the partnership's overall lead to 29 points. The championship leaders' team-mates, Toni Seiler (54, CH) and Frank Kechele (25, Ulm / Callaway Competition), came in fifth, which elevates Seiler into second place in the amateur classification.

After being hit with an early drive-through penalty, Dominik Schwager and Claudia Hürtgen (40, Aachen) in the BMW Z4 clawed their way back up the field to finish sixth. After a run of bad luck at the start of the season, Mamerow Racing will be pleased to have got on the scoreboard at last: Chris Mamerow (27, Waltrop) and René Rast (25, Frankfurt) took seventh place in the Mamerow Audi R8. The quickest of the Mercedes outfits were Jan Seyffarth (25, Querfurt) and Maximilian Mayer (20, Ingolstadt / SMS Seyffarth Motorsport) who finished eighth in their Mercedes-Benz SLS AMG GT3 ahead of the BMW Z4 driven by the Dutch duo of Simon Knap (23) / Jeroen den Boer (24 / DB Motorsport). Nicolas Armindo (30, F) and Robert Renauer (27, Jedenhofen / FROGREEN C02 neutral) brought the fastest of the Porsche 911s in at tenth.

All 16 races in the ADAC GT Masters are broadcast live on kabel eins free-to-air TV channel. Viewers in Germany, Austria and Switzerland can tune in at 1.15pm on Saturday and Sunday. The specialist channel SPORT1 will be broadcasting highlights of the ADAC GT Masters at the Sachsenring in the ADAC Masters Weekend Magazine on 16th June at 1.50pm. For continuous updates on completed laps and times during free practice and races, check out the Live Timing page at www.adac.de/motorsport.