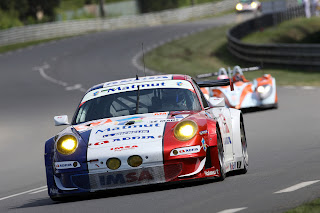 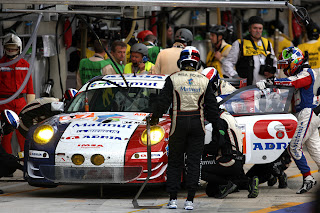 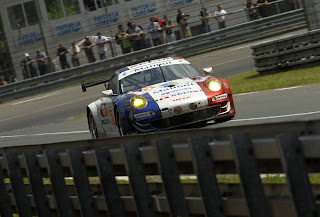 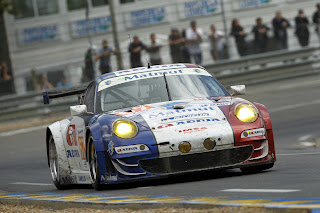 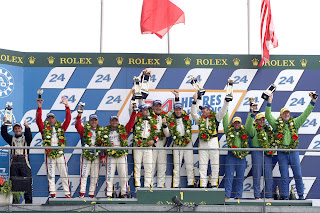 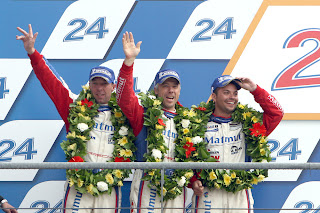 Stuttgart. Less than four minutes were missing for Porsche to clinch its 99th class win at the Le Mans 24 Hours. With the Porsche 911 GT3 RSR fielded by the IMSA Performance Matmut team, Frenchman Nicolas Armindo, Raymond Narac and Anthony Pons had led the field just a few laps before the flag dropped on the 80th running of the long distance classic in the Sarthe. But in the final minutes, tyre damage robbed the 2011-spec 911 of all hopes for victory. Nevertheless, the joy over second place was huge for the French Porsche customer team.

“For our team and partners, Le Mans is the most important race of the year,” said team owner Raymond Narac. “To have finished second with such a great team effort is a success that we will all savour for a long time. Thank you also to Porsche for the unbelievable support.” Nicolas Armindo said, “We focused all our work on this race. Achieving class victory at the dress rehearsal in Spa was wonderful, but it’s nothing compared to the feeling of climbing the podium here in Le Mans.”

Other Porsche teams had less luck this time on the legendary Circuit des 24 Heures. In the GTE Pro class the race was over during the night for the two Porsche 911 GT3 RSR fielded by Flying Lizard Motorsports and Felbermayr-Proton. Porsche works driver Patrick Long (USA), who shared the Flying Lizard 911 with his German works driver colleagues Joerg Bergmeister and Marco Holzer, slid on gravel, which another vehicle had just spread on the track in the first chicane, hit the stack of tyres and retired after 114 laps. “I didn’t have a chance to bring the car safely back to the pits,” he said. It was not the first problem that the number 80 vehicle had to contend with in Le Mans. In the first race lap, a broken shock absorber cost several positions, and later tyre damage caused even more time loss. “The race wasn’t going well for us right from the start,” said Joerg Bergmeister. “Still, we kept fighting. You never give up in Le Mans, a lot can happen here right to the end. It’s just a shame we couldn’t finish the race.”

The unexpected early retirement of the Felbermayr-Proton Porsche 911 GT3 RSR in the GTE Pro class came after 184 laps when Marc Lieb (Germany) came to a standstill on the infamous Hunaudières straight with gearbox damage. “I wanted to shift up but couldn’t get any gears in,” said Marc Lieb, who at the time was running in fourth place with his works driver colleagues Richard Lietz (Austria) and Wolf Henzler (Germany). The trio had won in Le Mans in 2010. “It’s such a shame we couldn’t take home points, especially at this race. Up until our retirement we were running really well. We experienced a few hiccups along the way, but mostly things were good. A podium result would have been possible.”

In the GTE Am class, Porsche had another iron in the fire for 17 hours with last year’s 911 run by Felbermayr-Proton. Team owner Christian Ried (Germany) and his Italian teammates Gianluca Roda and Paolo Ruberti, class winners of the season-opening round in Sebring, were running a promising fourth in the race. But after 222 laps, the Porsche Cup winner Gianluca Roda had to park the 911 trackside without any drive. However, Porsche works driver, Patrick Pilet (France) and Americans Seth Neiman and Spencer Pumpelly secured fourth place with the Porsche 911 GT3 RSR fielded by Flying Lizard Motorsports. Taking up the race as pole-sitters in their class, they could defend their top position in the early phase of the race, only to be temporarily thrown out of the top ten after a journey into the gravel.

“First and foremost, thank you to all the teams and drivers for their superb effort,” said Porsche Head of Motorsport, Hartmut Kristen. “Regardless of the result, we must analyse the race so that we can talk to the authorities of the WEC about a more balanced grading of our cars in the GTE Pro class for the second half of the season. We will also immediately begin preparations for the next races with the teams, as the championship classification is still open. We look forward with optimism.”

Round four of the World Endurance Championship is run on 26 August in Silverstone/Great Britain.