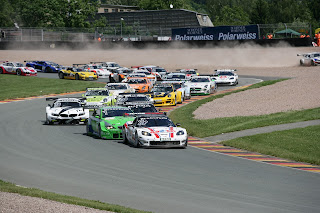 
Diego Alessi (40, ITA) and Daniel Keilwitz (22, Villingen / Callaway Competition) continue their successful run at the Sachsenring. The current championship leaders in their Corvette Z06 yesterday secured pole position for both ADAC GT Masters races in Saxony, and in Race 1 today, they notched up their second victory of the season. Jesse Krohn (21, Finland) and Nico Verdonck (26, Belgium) took second place in that icon of American sports cars, the Ford GT. Maximilian Götz (26, Uffenheim) and Sebastian Asch (26, Ammerbuch / kfzteile24 MS RACING Team) in the Mercedes-Benz SLS AMG claimed the remaining podium spot. "We didn't really expect to win on this track," said a surprised and delighted Keilwitz.

Diego Alessi laid the foundation for his second win of the season with a great start from pole position. The Italian went straight into the lead from pole but immediately came under pressure from reigning ADAC GT Masters champion Dino Lunardi (33, France / ALPINA) in the BMW ALPINA B6. Lunardi closed on Alessi to within attacking distance just before the changeover of drivers but was unable to manoeuvre into a position to pass the leading Corvette. The order of the first two cars remained the same at the start of the second stint, but now it was Maxime Martin's (26, Belgium / ALPINA) turn at the wheel of the BMW ALPINA to chase the leading Corvette up hill and down dale at the Sachsenring. The scrap for first place came to an early end, however, when Martin had to pit with a puncture three laps from the end.

Even so, front-runner Keilwitz wasn't allowed to sit back and relax for the last few minutes of the race. Having now moved up to second place, Nico Verdonck sensed an opportunity. Ultimately, however, the Ford GT driver had to be content with crossing the line 1.9 seconds behind the leader. The best Mercedes pair were Maximilian Götz and Sebastian Asch who made it onto the podium for the third time in five races in their black gullwing car.

"Maxime Martin put me under an enormous amount of pressure in the second half of the race, but I soon realised that he just wasn't quick enough to overtake me," said Keilwitz. "He suddenly disappeared from my rear-view mirror, and from then on I managed to keep a good distance ahead and control the race to the finish." The race was several laps too short for Nico Verdonck: "I was pretty close to the Corvette during the final laps, but I ran out of time to mount a serious attack on Keilwitz."

Fourth-placed Kristian Poulsen (36) and Christoffer Nygaard (26 / Young Driver AMR) in the Aston Martin V12 Vantage only just missed out on a podium but must have been very pleased indeed with the best result so far for the British coupé in the ADAC GT Masters. Poulsen also had extra cause for celebration: by finishing fourth, the Dane recorded his second win of the season in the amateur rankings ahead of Corvette driver Toni Seiler (54, CH / Callaway Competition) and Swen Dolenc (44, Maulbronn / FACH AUTO TECH) in the Porsche 911.

P6 finish best result of season so far for Frentzen

Heinz-Harald Frentzen (45, Neuss) is inching his way closer to the top of the table. In the Corvette he shares with Andreas Wirth (27, Heidelberg / Callaway Competition), the ex-Formula 1 and DTM driver achieved his best result of the season. Frentzen/Wirth came in sixth behind the Mercedes-Benz SLS AMG driven by the Austrian partnership of Hari Proczyk (36) and Dominik Baumann (19 / HEICO Motorsport). Positions seven and eight went to the two other gullwing cars of the HEICO-Team driven by Andreas Simonsen (22, Sweden) / Maxmilian Buhk (19, Dassendorf) and Kenneth Heyer (32, Wegberg) / Christiaan Frankenhout (30, NL).

Edward Sandström (33, S) and Christopher Mies (23, Heiligenhaus / Prosperia uhc speed) in their Audi R8 worked their way up from the tail end of the field to finish in the Top Ten. When Friday's qualifying was cancelled and the rule was applied that the cars had to start in the same order as the championship table, ADAC GT Masters newcomer Sandström found himself back in P36 on the grid. In the course of the 60-minute race, the Swede and his co-driver, ex-ADAC GT Masters runner-up Mies, picked off one competitor after another to finish in ninth position. Toni Seiler and Frank Kechele (25, Ulm) took the remaining point with tenth place in their Corvette.


All 16 races in the ADAC GT Masters are broadcast live on kabel eins free-to-air TV channel. Viewers in Germany, Austria and Switzerland can tune in at 1.15pm on Saturday and Sunday. The specialist channel SPORT1 will be broadcasting highlights of the ADAC GT Masters at the Sachsenring in the ADAC Masters Weekend Magazine on 16th June at 1.50pm. For continuous updates on completed laps and times during free practice and races, check out the Live Timing page at www.adac.de/motorsport.