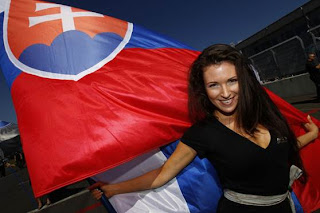 After three hotly-contested opening rounds of the season, the FIA GT1 World Championship heads to Slovakia for the Championship’ first visit to the Slovakia Ring, under the name of Matador GT1 Racing Weekend.

The circuit provided exciting and entertaining racing when staging the FIA GT3 European Championship in 2011.

Races in Nogaro (France), Zolder (Belgium) and Navarra (Spain) were each dominated by three different brands.

Following a difficult start to the season, Hexis Racing took the honours two weeks’ ago in Spain, claiming an impeccable one-two victory in Saturday’s Qualifying Race before pulling clear of the field to win Sunday’s Championship Race.

The double race win for the No.1 Hexis Racing McLaren MP4-12C enabled Fred Makowiecki (FRA) and Stef Dusseldorp (NLD) to claim the lead of the drivers’ championship.

In the sister car, Alvaro Parente (PRT) and Gregoire Demoustier (FRA) are eighth after a solid weekend at Navarra which yielded second place in the Qualifying Race and fourth in the main event.

Parente, like a number of fellow competitors, is relishing a step into the unknown at Slovakia. “The team did a great job last weekend, we raised our game quite a bit since the first two rounds of the championship,” he said.

“Both the team and McLaren GT are working very hard. It is normal that when you put in that amount of effort you can work your way up to the top end.

“I hope we can have a really good race in Slovakia. It is a nice challenge to get to know a new track.

“I know most of the tracks in Europe. You have to learn the details as you go, and try to be ready for Qualifying.”

Belgian Audi Club Team WRT’s Stephane Ortelli has done his homework ahead of the fourth round. He expects the Audis to rebound from a paltry return of just one point for 10th place in the Championship Race at Navarra.

“I think it is great for the FIA GT1 World Championship to be visiting new tracks. I have been talking to my friend Yvan Muller about the circuit, and he likes it a lot, he really enjoyed it when he went with the FIA World Touring Car Championship. I think it is good that we are going there,” Ortelli said.

“The track is very fast, there are many fast corners, which will suit the Audi R8 LMS ultra. We hope it will be the opposite of Navarra, which although is a great track, has slower longer corners where we suffered quite a lot. Hopefully we will look a lot better in Slovakia.”

The ALL-INKL.COM Münnich Motorsport Mercedes team, which finished second and third in the main event, lead the teams’ standings heading to Slovakia.

“There is always a pressure when fighting for a championship, and that does not change when you become the hunted rather than the hunter, when you go from chasing and into the lead," said ALL-INKL.COM Münnich Motorsport team manager Marc Basseng (DEU).

The team is looking for Mercedes to become the fourth brand to record a win this season having been the closest challengers to the McLaren in Navarra.

"It has always been in my mind since Navarra that we led the teams’ standings last year before we had a couple of bad results and we dropped out of contention, so we need to remain focused, to gain good points," Basseng added.

Exim Bank Team China Porsche driver Mike Parisy (FRA) took victory in Race Two of the GT3 weekend last year so knows the circuit well and will be looking to be a strong contender next weekend.

“I am quite confident for this fourth round, in Slovakia, as I won there in the Mercedes in the FIA GT3 European Championship last season, so I have a very good feeling about this track,” he said.

“In the team everyone is working hard, to get the pit stops right and to have as good a set-up as we can.

“We are still very much in the battle for the championship, we are very strongly prepared. Me and Matt (Halliday) will try to get the very best out of the car.”

Local fans will no doubt follow closely the fortunes of Slovakia's Stefan Rosina who will line up in the No.25 Reiter Engineering Lamborghini this weekend at Slovakia Ring, replacing Peter Kox. Rosina last raced in the FIA GT1 World Championship in Brno in 2010.

Team boss Hans Reiter is looking to put the disappointment of Navarra behind him. “It is obvious what we have to learn from Navarra, our pit stops were a disaster, and our starts are not good enough. Those are the two key factors that we need to work on before the event,” he said.

“In Qualifying our pace was OK, maybe if Hexis had not had a problem with the McLaren they might have had pole as well, but we were near the top, which is a positive to take.

“Our starts are not that good, and we have done some testing to try and sort this out because we are losing positions with them at the moment.”

The Vita4One BMW continue to climb the team rankings helped by 22 points for a strong showing in Navarra. The objective for the team according to GT specialist Michael Bartels (DEU) is to “be consistent and score regularly with both cars.” This philosophy has taken Bartels to six team and four driver Championships.

The Sunred Ford produced an improved performance in Spain – Matteo Cressoni (ITA) and Milos Pavlovic (SRB) qualifying as high as eighth – before failing to finish both races. Slovakia may bring long-overdue redemption.

Similarly the AF Corse Ferrari squad will look to rediscover the form of Nogaro this weekend.

Valmon Racing Team Russia’s Maxime Martin (BEL) will miss the event due to other driving commitments but is looking to a return at the Algarve in round five where the team will take delivery of the new Aston Martin Vantage.

“I will miss Slovakia which is a shame because we are starting to work through the issues we have had with the car at the start of the season,” he said.

“We are due to have the new car for Algarve so hopefully we can continue to make progress and move up the order when the new car comes.”

A modern circuit at the heart of Europe, Slovakia Ring is just 40km from the Slovakian capital of Bratislava.

The twisting 5.92-kilometre track was first opened in 2008 during a phased opening process, and will now host the FIA GT1 World Championship for the first time in 2012 as well as rounds of support races

Video footage for editorial use available at WorldLink: www.eurovision.net/worldlink.