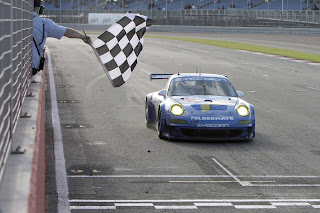 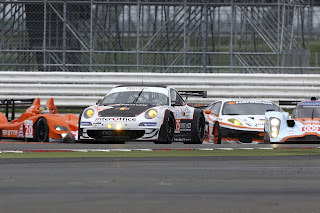 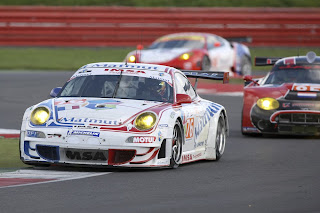 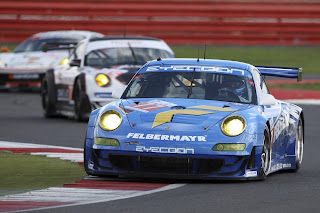 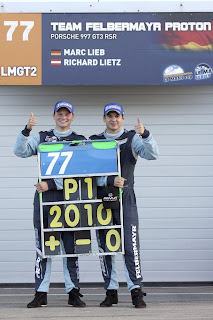 Stuttgart. Reliable technology, faultless driving, perfect teamwork. This is how Porsche won all three championship titles in the GT2-class of the Le Mans Series. With fifth position for Porsche works drivers Marc Lieb (Germany) and Richard Lietz (Austria) in the 911 GT3 RSR at the 1,000 kilometre race in Silverstone they successfully defended the title. The German Felbermayr team under the direction of owner Christian Ried (Germany) celebrated a convincing win of the team title for the first time. And in the fiercely-contested GT2 category with six renowned brands, Porsche secured the prestigious manufacturers’ title. With an excellent second position at the finale, Porsche-Junior Marco Holzer (Germany) and Richard Westbrook (Great Britain) rounded off the perfect race Sunday for Porsche.

The three championship titles in the Le Mans Series demonstrate once again that the best GT cars in the world are built in Weissach. They perfectly continue this year’s success story, in which the Porsche teams already won the 24 hour races at Dubai, Le Mans and Spa-Francorchamps. And in the American Le Mans Series, the 911 GT3 RSR also leads its classification.

“It’s fantastic that we’ve defended the championship title,” said an enthusiastic Marc Lieb, who is the most successful pilot in the Le Mans Series with four championship titles under his belt. “And we’re particularly thrilled that our Felbermayr squad was also rewarded with the team title, because one of the keys to our success was the perfect teamwork of the crew with the pit stops and our strategy. Everything fitted together like cogs in a wheel.” Richard Lietz, for whom this marks his second championship title after 2009, was also delighted. “What a year!” summarised the Austrian. “The fight in the GT2 class was even harder than last year, the Ferraris in particular were unbelievably strong. We had to fight hard at every race from the first to the last minute. In qualifying we were hardly ever the fastest, but thanks to the reliable technology of the 911 and the great teamwork we achieved three victories, and have now crowned the season with all titles for Porsche. We are truly proud of this.”

Lieb and Lietz had taken up the finale from third on the grid and had initially held back in the 45-strong field in order not to take any risks on the way to claiming the title. When the sole remaining rival in the drivers’ classification, the Ferrari with ex-Formula 1 stars Jean Alesi and Giancarlo Fisichella, were thrown well down the field with problems, a huge weight fell from the leading Porsche pair.

Celebrations as well in the pits of ProSpeed Competition. After securing the FIA GT Championship last year with Richard Westbrook, the Belgian crew were new to the Le Mans Series this season. “The adjustment was harder than expected. Everything was new for the team and the drivers,” said Westbrook. “We improved from race to race, but only here at the final did we manage to make a breakthrough.” Heading into the race from fifth, Westbrook and his 22-year-old teammate Marco Holzer gradually worked their way to the front. “Man alive!” sighed the Porsche-Junior at the finish. “I was so nervous but at the same time concentrated. It’s very important for our team to finish the season with such a great result. For me, the most difficult thing in the Le Mans Series was getting used to the faster sports prototypes which weren’t exactly considerate to us drivers from the lower classes in overtaking, while we were busy fighting for positions in our own category.”

For the French IMSA Performance Matmut team, sixth place at the final race was a conciliatory end to a season of mixed fortunes. After clinching third place at the previous round in Hungary, Porsche works driver Patrick Pilet and his French compatriot Raymond Narac again had the podium in sight, but Narac was suffering from a bad bout of the ‘flu. For this reason, the Porsche dealer and gentleman driver from Rouen wasn’t able to follow on with his strong performance from the previous rounds. “Patrick had to do the bulk of the work,” said Narac. “The race was indeed strenuous,” stated Pilet. “But especially because the prototype drivers were very aggressive. Still, it was great fun to fight against our rivals on this super circuit. And our team can be proud, because we were always amongst the fastest in pit stops.”

In tenth, the second Felbermayr squad rounded off Porsche’s winning durability at the final of the Le Mans Series, but were not totally satisfied. “Unfortunately, that was our worst result this season,” said Martin Ragginger. The Austrian joined forces with team owner Christian Ried for the season, with the two regular pilots receiving support at the final from Porsche factory driver Romain Dumas (France). The highlight for the second Felbermayr-911 was second at the season-opener in Le Castellet. But at the end in Silverstone, delight was the overriding emotion: In their first season together in the Le Mans Series, Ried and Ragginger brought home third place in the GT2 drivers’ classification.


Statistics: 5th and final race of the Le Mans Series in Silverstone

Contested for the first time in 2004, the Le Mans Series (LMS) is open for sports prototypes and GT vehicles. The regulations are based on the rules of the Le Mans 24 hour race. Five championship rounds are contested this season on circuits throughout Europe. The races run over a distance of 1,000 kilometres, with the eight hour race in Le Castellet as the only exception.

All race cars start together but are classified separately according to the class. Points are only allocated for placings in each class. Championship titles are awarded for drivers, manufacturers and teams in all four classes. Porsche works drivers Marc Lieb and Richard Lietz won the GT2 driver’s title in 2009. In 2008, Porsche won the LMP2 title for drivers, manufacturers and teams.
PRESS Porsche Motorsport/Acredited Autorized Members.
Posted by AmigosRacing/MRS GT. at 14:03