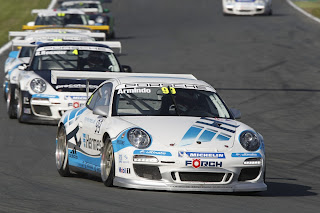 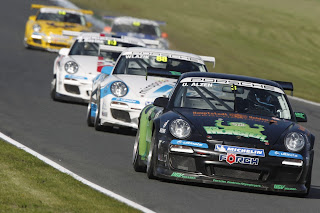 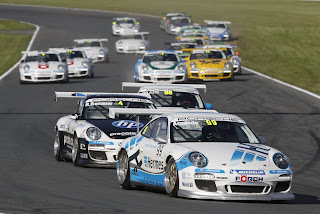 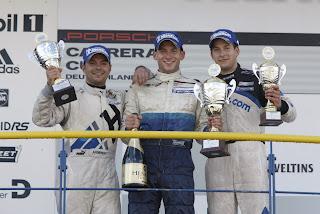 Stuttgart. Nick Tandy impressively dominated the eighth round of the Porsche Carrera Cup Deutschland. He was not only the fastest in the free practice session, but posted a clear pole position, drove the fastest race lap and won the penultimate round of the season in the Motorsport Arena Oschersleben by a margin of 5.8 seconds. With his fifth victory this season, the Briton driving for Konrad Motorsport improved his chances of claiming the prestigious championship title at the finale of Germany’s fastest brand trophy series in four weeks at Hockenheim.

After points’ leader Nicolas Armindo saw the flag in second, the gap between the Frenchman from Hermes Attempto Racing and his British pursuer has shrunk to a mere five points heading to the ninth and final race of the season – it hardly gets more exciting than this.

For Tandy, only the first of 22 race laps was critical, when guest driver René Rast (Farnbacher Racing – PZN) tried to pass the front-runner. But when the German was sidelined in the first lap due to a loss of coolant, the Briton had a free run. This was also the case for Armindo, who had taken up the sprint from fourth on the grid and had already moved into second after the first lap, easily pulling clear of Robert Renauer. For the German (Herberth Motorsport PZ Olympiapark) his dream of finally finishing on the podium this season came true. The situation only became uncomfortable towards the end when Sean Edwards crept closer. Renauer brought home a close third by a half-second margin.

Edwards again demonstrated his fighting qualities with fourth place: Driving for Team Deutsche Post by tolimit, the Briton had only started the race from seventh. And although Edwards has not contested all rounds this season, he managed to shove Martin Ragginger off fifth position overall heading to the final. The Austrian from Schnabl Engineering came home empty handed from Oschersleben.

Renauer’s teammate, Uwe Alzen, took off from a lowly ninth on the grid, but did not disappoint fans with his famed driving spirit. The German fought his way through to fifth place despite giving a tyre stack a spectacular nudge in the first corner after the start. With this result, the double Carrera Cup champion holds on to his third overall in the rankings, but only by a slim two-point margin over Renauer.

Stefan Rosina made up several positions at the race in Germany’s Magdeburg region. After a bungled qualifying which saw the Slovakian sitting 13th, Rosina put in a faultless drive to finish sixth. Because the Förch Racing pilot only joined the Carrera Cup at the Nürburgring race, his score on the points’ table doesn’t play a major role. Sascha Maassen again achieved a decent result, with the German (Team Deutsche Post by tolimit) bringing home seventh after a spirited drive. A youngster also turned heads with his performance: 19-year-old Ferdinand Stuck (Germany, Farnbacher Racing – PZN), who receives support as a “Porsche Motorsport Talent” only took up the race from 20th to celebrate 13th at the flag – his second best performance this season.

Nick Tandy (winner): “The first lap when René attacked immediately was rather nerve-wracking. I slid briefly on water and imagined myself ending up in the gravel, but I managed to control the car and luckily had enough of an advantage. Five pole positions, five victories – now that’s something. The only thing to take the shine off the occasion was Nicolas’s second. He simply doesn’t make a mistake.”

Nicolas Armindo (second): “Second place? Super! We’ve moved a little closer to the title. My plan worked, I overtook Robert at the start, watched the fight between Nick and René and then calmly and carefully reeled in second place.”

Robert Renauer (third): “See, so I can do it. Obviously I’m thrilled about my first podium result this season – it took long enough. Nicolas tore past me after an excellent start and afterwards my race was somewhat uneventful. Only towards the end, Sean Edwards crept a little closer, but it didn’t make me too nervous.”

The ninth and final round of the Carrera Cup Deutschland takes place on 17 October on the Hockenheimring Baden-Württemberg.