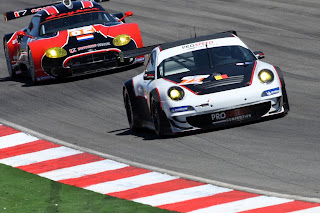 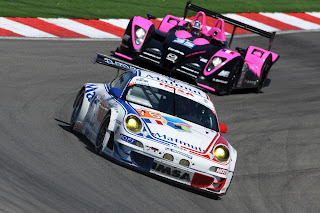 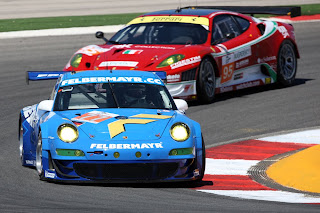 Stuttgart. The final of the Le Mans Series is shaping up to be a real thriller. After three victories from four races this season, Porsche factory pilots Marc Lieb (Germany) and Richard Lietz (Austria) travel to the last round on 12 September in Silverstone as the clear points’ leaders and title favourites. Driving a Felbermayr-Proton Porsche 911 GT3 RSR, they are determined to bring home the last three points from the traditional race track in the British Midlands that they need to successfully defend their GT2 class title. Meanwhile, Porsche has its sights on the manufacturers’ title.

Despite their comfortable margin, the 2010 Le Mans winners are not about to take the race in Silverstone lightly. “Right here last year we experienced just how hard it can be when you’re a hair’s breadth away from winning the title. And that’s why we are very cautious about making predictions,” says Marc Lieb, who has already won the Le Mans Series title three times. “In any case, we are very well prepared for the final and the fight against our strongest rivals from Ferrari.”

Richard Lietz’s pole position last year on the 5.141 kilometre Grand Prix circuit gave a clear indication that the track suits the Porsche 911 GT3 RSR. “The flowing track layout with its challenging high-speed corners as well as the whole atmosphere make this race great fun,” says the Austrian. “Silverstone has a superb sports car tradition, and the enthusiasm of the British fans is an added motivation. Lately our qualifying results have not been as good as those of our rivals. We’re working hard on this so that we can take up the final race from one of the front grid spots.”

Driving the second 911 GT3 RSR of the German-Austrian Felbermayr squad, Martin Ragginger (Austria) and Christian Ried (Germany) head to the final ranking third overall in the standings. The two kicked off the season by pocketing a sensational second in Le Castellet and after yielding further top results are even contenders for runner-up honours. Like recently on the Hungaroring, they receive support in Silverstone from Porsche works driver Romain Dumas (France).

Just in time for the final, Porsche factory pilot Patrick Pilet and his French compatriot Raymond Narac made the breakthrough. In the cockpit of a 911 GT3 RSR fielded by the IMSA Performance Matmut team, they brought home third from Hungary, their first podium result this season, and moved up the overall rankings to now sit fourth. “At last we’ve been rewarded for all our hard work,” says Patrick Pilet. “We’ve looking even more forward to the final on this fabulous track. How wonderful would it be though to celebrate our first Le Mans Series victory in Silverstone?”

ProSpeed Competition is aiming for a good end to a difficult first season in this fiercely-contested championship. Contesting the last race for the Belgian squad are again Richard Westbrook (Great Britain), the FIA GT champion of 2009, as well as Porsche-Junior Marco Holzer (Germany).

Contested for the first time in 2004, the Le Mans Series (LMS) is open for sports prototypes and GT vehicles. The regulations are based on the rules of the Le Mans 24 hour race. Five championship rounds are contested this season on circuits throughout Europe. The races run over a distance of 1,000 kilometres, with the eight hour race in Le Castellet as the only exception.

All race cars start together but are classified separately according to the class. Points are only allocated for placings in each class. Championship titles are awarded for drivers, manufacturers and teams in all four classes. Porsche works drivers Marc Lieb and Richard Lietz won the GT2 driver’s title in 2009. In 2008, Porsche won the LMP2 title for drivers, manufacturers and teams.
Posted by AmigosRacing/MRS GT. at 10:39