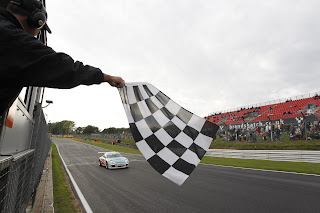 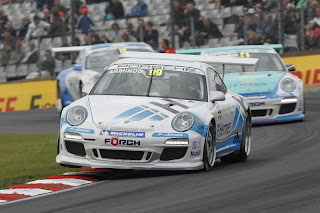 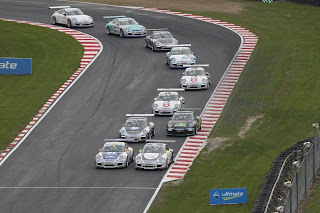 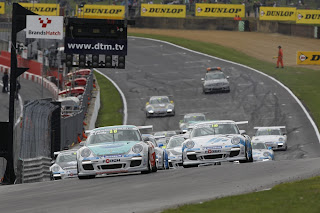 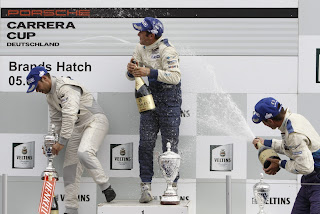 Stuttgart. The three-way fight for the title of the Porsche Carrera Cup Deutschland has turned into a duel. With his fourth win of the season in Brands Hatch, local hero Nick Tandy (Konrad Motorsport) shrunk the gap to points’ leader Nicolas Armindo. The Frenchman from Hermes Attempto Racing saw the chequered flag on the home track of his toughest rival in second place. With two races left on the calendar only seven points separate Armindo and Tandy – the two drivers who have divvied up all the victories between themselves at Germany’s fastest brand trophy series. At the same time, their closest pursuer, Uwe Alzen (Germany, Team Herberth Motorsport PZ Olympiapark), was thrown back in the overall classification due to tyre damage.

Whilst the British pole-sitter Nick Tandy got away well at the start to increase his gap lap for lap and bring home an unchallenged victory, Nicolas Armindo had his hands full. Only in the first third of the race could the 28-year-old take a breather. After that, Armindo had to deal with the Dutch guest starter from Konrad Motorsport, Jeroen Bleekemolen, and his pursuer Martin Ragginger. For the Austrian from Schnabl Engineering the main goal was not to lose contact to the front-runners. But all hopes were dashed when he was sidelined in the twelfth lap. Bleekemolen went on to celebrate the third podium spot.

For the second time this season, Christian Engelhart brought home a well-deserved fourth place. Driving for MRS PZ Aschaffenburg, the German experienced various problems over the course of the year but at least now, on the season’s finish straight, he managed to move into eighth overall in the drivers’ standings. Snatching fifth in Brands Hatch, Stefan Wendt from the Schnabl Engineering squad underlined his top form in qualifying when the Carrera Cup novice from Germany turned heads with his fourth place.

Guest driver Stefan Rosina from Slovakia yielded sixth at his second Carrera Cup race this year, securing precious points for Förch Racing, a team new to the series this year. Trailing close behind Rosina was Robert Renauer. The German not only extended his fourth overall ranking but moves threateningly close to his teammate at Herberth Motorsport PZ Olympiapark, Uwe Alzen. Alzen was the underdog of the race. Due to a puncture and the ensuing pit stop, he was relegated from seventh back to 13th place. With this, the double Carrera Cup champion holds on to his third overall ranking, but the duo at the lead have now moved out of reach.

Nick Tandy (winner): “What can I say? It doesn’t get better than winning from pole position, and unchallenged at that. The reason I’m sitting second in the points is because I had bad luck at two races. So, there is really just one goal now: We want to win the last two rounds!”

Nicolas Armindo (second): “Nick drove a very strong race at home. I had no chance to catch him. But our team today was fabulous, we’ve never tested here and still managed second. With just seven points separating Nick and I, the rest of the season is shaping up to be very exciting.”

Jeroen Bleekemolen (third): “From fifth place to the podium, I can be happy with that. But most of all I really enjoyed fighting with Nicolas and Martin.”

Round eight of the Porsche Carrera Cup Deutschland takes place on 19 September in the Motorsport Arena Oschersleben.