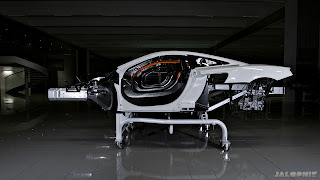 McLaren is more than a carmaker. They've created a temple for the world's best engineers, designers, and problem solvers. The new factory where they build the MP4-12C is a technology advanced, 344,445-sf automotive nirvana tucked away in the English countryside.
A few people have ventured inside during business hours, but no one outside some cleaners and security guards have ever seen it like this. At night. Without the 750 assembly "experts" creating the company's extreme supercar.
Photographer GF Williams captures this amazing place, frozen in time at each stage of production for this exclusive Jalopnik photo shoot.
Fourteen days. That's how long it takes for the various parts shipped to the McLaren factory to come together to create the $240,000 MP4-12C. In the roughly eight months the plant has been open they've produced over 1,000 of them.

"The only people around were cleaners making sure that everything is absolutely perfect, which is the Ron Dennis way," says Williams, referring to the company's Chairman.
Although the cars are hand-built, the plant is almost cyborg-like in how it combines man and machine. Vertical conveyer mini lines feed multiple stations, each equipped with an advanced human-machine interface that aids the workers in installing parts correctly.
The computers are integrated into the tools and assembly equipment and the system won't let an engine advance, for instance, until the current one is completed successfully.
At the end of the line, engines are tested to assure they match performance specs before being put into the cars.
The plant is so precise and carefully designed it doesn't have the roar one would expect from a place cranking out cars.
"Having been to the factory during the day a few weeks prior to the night time visit it's amazing to note that the factory is so quiet when the workforce is in full flow that there isn't much difference in noise level when none of them are even there," says Williams.
Visually, though, the contrast is stark.
As you click through the gallery you'll see each station has the stage of build completed for us, so that you can see what it looks like before it goes onto the next part of the process.
Finally, there are completed cars at the end of the production line ready to go off to their lucky new owners. Click through the gallery to see each car and download wallpapers.
Our thanks go out to McLaren for inviting us and for having a rather late guiding us round the factory in the dark with a flashlight.
GF Williams is a UK-based automotive photographer and car enthusiast.
Posted by AmigosRacing/MRS GT. at 19:44