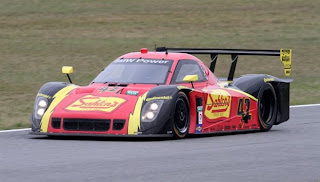 Roar Before the Rolex 24, Session Reports

DAYTONA BEACH, Fla - Dane Cameron led a trio of BMWs atop the time sheets to kick of Saturday’s test sessions for the Roar Before the Rolex 24. In GT, it was Patrick Long’s Porsche GT3 Cup leading the way, while another Porsche, the Caymen driven by Shane Lewis, topped the GX times.
Driving the No. 42 Team Sahlen BMW/Riley, Cameron laid down a 1:42.101 (125.52 mph) early and could not be bested by either of the Target/TELMEX Chip Ganassi Racing BMW Rileys, which came on strong late in the one hour and 45 minute session.

The next Rolex Series test session at the Roar Before the Rolex 24 is scheduled to begin at 1:00 p.m. (ET). Live timing and scoring is available on grand-am.com.

Allmendinger Picks Up Where He Left Off, Fastest On Day 1

Defending Rolex 24 winners AJ Allmendinger and Andy Lally led their respective classes in Friday afternoon’s second and final practice session to open the Roar Before the Rolex 24.
With the track dry following a damp morning sessions, the afternoon times were fastest of the opening day of the three-day test in preparation for the Jan. 26-27 Rolex Series season-opening Rolex 24 At Daytona.
Allmendinger led the Daytona Prototype competitors with a lap of 1:42.918 (124.53 mph) in the No. 60 Michael Shank Racing Ford/Riley, followed by Chip Ganassi Racing teammates Memo Rojas (No. 01 BMW/Riley) and Dario Franchitti (No. 02 BMW/Riley).
Lally paced the GT contingent, running 1:49.322 (117.23 mph) in the No. 44 Magnus Racing Porsche GT3.
David Donohue was fastest in the debut of the GX class, running 1:57.466 (109.10 mph).
McMurray Paces Opening Rolex Series Session At Roar Before the Rolex 24
Under rainy skies, NASCAR Sprint Cup standout Jamie McMurray led the first Roar Before the Rolex 24 practice session driving the No. 02 Target/TELMEX Chip Ganassi Racing with Felix Sabates BMW Riley. Nick Tandy in the No. 32 Orbit Racing Porsche GT3 Cup topped the GT field. Both drivers steadily improved their times through the one hour and 45 minutes session as the steady rain came to halt and the track conditions improved. McMurry ended the session with a 2:01.852 (105.177 mph), Tandy a 2:05.183 (102.378 mph). BGB Motorsports was the quickest of the GX entries, as Ryan Eversley laid down a 2:13.408 (96.066 mph) in the No. 38 Porsche Cayman GX.R. The next practice session is scheduled for 1:30 p.m. (ET)
Source: GrandAm.com
.
Posted by AmigosRacing/MRS GT. at 20:33