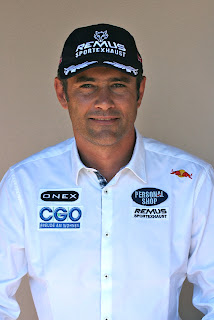 
Seyffarth Motorsport have signed up a celebrity driver for their home race in the shape of former F1 driver Karl Wendlinger. The 43-year-old from Austria makes his ADAC GT Masters debut at the Lausitzring in a Mercedes-Benz SLS AMG on the weekend of 24th - 26th August. After a career in Formula 1 that spanned 41 Grand Prix races, he now shares the cockpit of a Mercedes Gullwing with Jan Seyffarth (26, Querfurt). Team boss Rüdiger Seyffarth is delighted with his high-profile recruit: "I am very proud to announce Karl Wendlinger as our second driver for the race weekend at the Lausitzring. Karl is a GT racing specialist, and together with Jan Seyffarth, we have a strong twosome. With this driver pairing, we aim to demonstrate the full potential of our team."

Wendlinger can look back on a long and successful career. After his time in Formula 1, the Tyrolean enjoyed great success in GT racing, winning not only the FIA GT title but also recording victories and class wins in the major endurance races at Le Mans (France), Daytona and Sebring (both USA). Since early 2012, Wendlinger has been working for Mercedes AMG as a brand ambassador. He has therefore come full circle, because in 1990 and 1991, he was a member of the same legendary Mercedes Junior Team competing in the World Sports Car Championship that also included Michael Schumacher and Heinz-Harald Frentzen. Wendlinger now has the prospect of competing against former team-mate Frentzen at the Lausitzring. In the 1994 and 1995 seasons, both of them lined up for Peter Sauber's Formula 1 team. The Super Sports Cars League event at the Lausitzring now pits Wendlinger in a Mercedes-Benz against Frentzen in a Corvette.

Wendlinger is looking forward to his debut in the ADAC GT Masters: "First of all, let me say how pleased I am to be racing again. This will be my first outing in the ADAC GT Masters. I have been following developments in the series, of course. The organisers do a fantastic job and the championship has come along really well. The starting field is strong in terms of quality and quantity, and the arrangements are very professional. No wonder that this series is so popular with the fans. I'm optimistic about the race at the Lausitzring because I'm convinced that I have excellent partners in Jan Seyffarth and Seyffarth Motorsport."

Jan Seyffarth hopes that having such a strong team-mate on board for his home race could turn the tide on a season in which bad luck has frustrated his quest for points: "I am personally fairly satisfied with the way things have gone so far in the ADAC GT Masters, but the overall performance leaves a lot to be desired. We have been in promising positions but then had a stroke of bad luck or just fallen behind. In terms of lap times, we have consistently been one of the best SLS AMGs, but in terms of race results and for the reasons mentioned, we have nothing to show for it."

Seyffarth is intimately familiar with the Lausitzring and its peculiarities, knowledge that he intends to capitalise on at the weekend with his new team-mate. "In addition to high-speed corners where good aerodynamics are called for, there are also some slow corners where the need is more for mechanical grip. So in setting up the car, you have to go for the best possible compromise. The track surface is very smooth, which doesn't make the setup process any easier." Contestants in the ADAC GT Masters are confronted with a further challenge by the special characteristics of the track where it exits and re enters the oval. "It's the infield section inside the actual speedway that makes the Lausitzring so exceptional - you leave the natural oval configuration to negotiate the infield and then return to it. In both transitions, there are some bumps that you have to watch out for and which make for a very special driving experience. You also have to monitor the track conditions closely, because there is this strange phenomenon whereby the lap times get slower within the space of an hour, but no one knows why. In other words, the track can change extremely fast."


ADAC GT Masters on TV: All 16 races of the ADAC GT Masters are broadcast live at 12.15pm on Saturdays and Sundays in Germany, Austria and Switzerland on free-to-air TV channel kabel eins. Sports channel SPORT1 will feature highlights of the ADAC GT Masters from the Red Bull Ring in the ADAC Masters Weekend Magazine on 1st September at 2pm. In addition, live timing from all practice sessions and races to supplement live TV broadcasts can be found at www.adac-gt-masters.de.

Further information available at www.adac.de/motorsport and www.adac-gt-masters.de
Posted by AmigosRacing/MRS GT. at 23:42