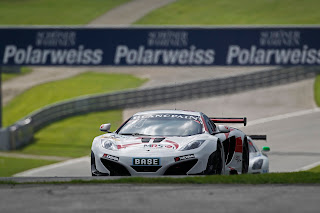 The Porsche 911 dominated qualifying for Race 1 at the Red Bull Ring in Austria. Three cars of the iconic German sports car battled it out for pole position, driven by Mario Farnbacher, Robert Renauer (27, Jedenhofen / FROGREEN CO2 neutral) and Christian Engelhart (25, Kösching / Team Geyer & Weinig-Schütz Motorsport) respectively. Farnbacher set the first fastest time, but was overtaken firstly by Renauer and then by Engelhart. Farnbacher launched a counterattack shortly before the end of qualifying, toppling Engelhart from the top spot once more. Engelhart was finally beaten by Renauer as well and is in third place on the grid on Saturday. Only the two Corvettes prepared by Callaway Competition and driven by Diego Alessi (40, I) and Andreas Wirth (27, Heidelberg) were able to pit themselves against the super-quick Porsches in the battle for the top spot but had to eventually settle for fourth and fifth. Florian Stoll (31, Rickenbach / kfzteile24 MS RACING team) is sixth on the grid in Race 1 in the fastest of the Mercedes-Benz SLS AMGs.

"We were holding back a long time on the final push for pole position because the track was still partially compromised at the beginning by oil. At the end of qualifying the track got a little bit faster," said Farnbacher, who, after a change of manufacturer is now contesting in a Porsche 911 for only the second weekend in his father's team. "I don't want to be too optimistic about the race on Saturday, but we've put down firm foundations for a decent result."

There was a double premiere in the second qualifying session for Sunday's race: Philipp Eng took his first pole and also set the fastest time ever in the ADAC GT Masters in the new McLaren MP4-12C, posting a lap average of 171.9km/h to secure pole position in the League of Super Sports Cars race.

"My lap was just very good," said a delighted Eng. "Actually, there are always one or two places where you make some small mistakes, but that lap was simply perfect. I'm really pleased about this pole position for the whole team, especially since after a difficult start to the season we've worked so hard with McLaren to be out in front." With his best time just before the end of the session, the Austrian driver consigned the Porsche 911 of Nicolas Armindo (30, F / FROGREEN CO2 neutral) and the Corvette of Daniel Keilwitz (23, Villingen / Callaway Competition) who is second in the standings, to second and third position on the grid. Martin Ragginger (24, A / FACH AUTO TECH) will be in fourth place for the start of Sunday's race in his Porsche 911. Former Formula One and DTM driver Heinz-Harald Frentzen (45, Neuss / Callaway Competition) brought home his Corvette in fifth place.

ADAC GT Masters on TV: All 16 races of the ADAC GT Masters are broadcast live at 12.15pm on Saturdays and Sundays in Germany, Austria and Switzerland on free-to-air TV channel kabel eins. Sports channel SPORT1 will feature highlights of the ADAC GT Masters from the Red Bull Ring in the ADAC Masters Weekend Magazine on 18th August at 12.15pm. In addition, live timing from all practice sessions and races to supplement live TV broadcasts can be found at www.adac-gt-masters.de.