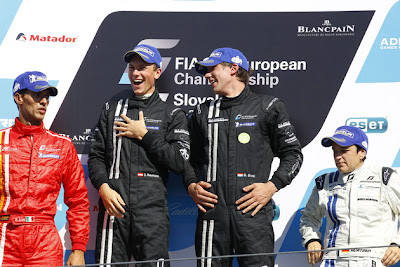 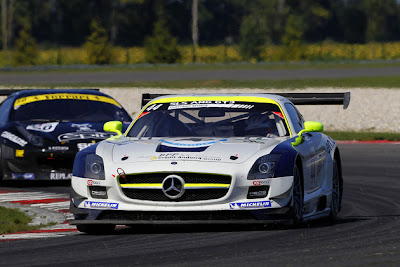 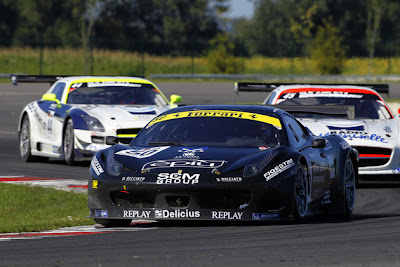 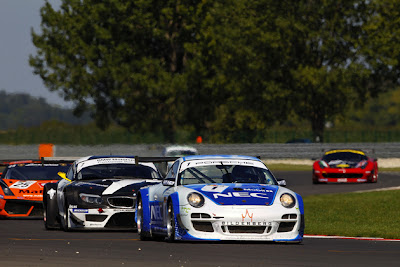 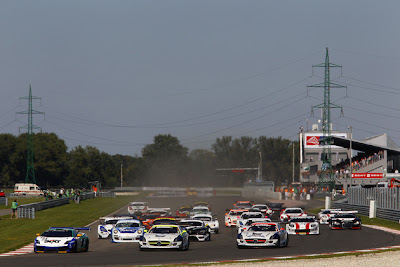 Mercedes-Benz joined Audi, BMW, Ferrari, Lamborghini and Porsche as winners in the 2011 FIA GT3 European Championship when Brice Bosi took the chequered flag in Round 9 at the Slovakia Ring in the nr44 Heico Motorsport Mercedes-Benz SLS AMG. It was also his, co-driver Dominik Baumann's and Heico Motorsports first FIA GT3 victory and the smiles from the top step of the podium spoke volumes.

Second place went to the nr50 AF Corse Ferrari, with Francesco Castellacci bring the car home to extend his, and Federico Leo's, lead in the driver’s championship to 16 points. The Italians battled hard and Castellacci held the lead for most of the second half of the race but couldn't hold of the challenge from Bosi in the closing stages. Third place went to the nr7 Need for Speed Team Schubert BMW Z4 of Claudia Huertgen and Csaba Walter, their first podium this season since Round 1 in Portugal.

From Pole Position Albert von Thurn und Taxis, in the nr24 Reiter Engineering Lamborghini, led the 27 car field into the first corner as the lights went green. The two Heico Motorsport Mercedes made a good start both passing the the nr50 AF Corse Ferrari of Federico Leo, with Dominik Baumann in the nr44 car ahead of Filip Sladecka in the nr45 Mercedes.

There was also some drama at the first corner as the nr35 Faster Racing BMW spun causing other cars to take avoiding action, with some inevitable contact being the result. The nr3 Graff Racing Mercedes returned to the pits with rear end damage while the nr35 BMW also returned slowly to the pits.

Back at the front the Reiter Lamborghini was holding a small gap as the two Heico Mercedes fought over second place, with Sladecka finally getting the upperhand on lap 7.

Three laps later the nr45 car took the lead as a rear puncture forced the Lamborghini to limp back to the pitlane. A new tyre was fitted but the bodywork was too badly damaged and von Thurn und Taxis was forced to park the car behind the barriers at Turn 2, his race finished.

The pit window opened and over the next 10 minutes the cars changed tyres and drivers. The main beneficiary was the nr50 AF Corse Ferrari with Francesco Castellacci emerging from the pitlane between the two Heico Mercedes. The Italian then set about trying to pass the nr45 Mercedes of Patrick Hirsch, which he did on lap 17 down the inside at the first corner. Brice Bosi, in the nr44 Heico Mercedes then caught and passed his teammate for second place as Hirsch was starting to drop back. Bosi kept pace with the leader and bided his time as the clock counted down. On lap 25 and with 10-minutes to go Bosi made his move at T10 and took the lead from Castellacci, who was struggling for grip in the Ferrari.

Behind the leading pair Claudia Huertgen was making rapid progress up the field, passing Dino Lunardi before catching the struggling Patrick Hirsch. The very wide Mercedes made it extremely difficult from the German driver and Lunardi was able to join in the fight for 3rd place. Lunardi repassed the nr7 BMW but Huertgen used all of her experience to time her move to perfection and swept past both cars to move into the final podium position but nearly 30-seconds behind the lead cars.

Another car on the move was the nr9 Team LMP Motorsport Aston Martin DBRS9 of Maxime Martin, who had been handed the car in 8th place by Gael Lesoudier at the pitstops. Martin rapidly made progress through the field and passed Patrick Hirsch on the last lap for 4th place as the chequered flag was shown at the end of the 60-minute encounter.

At the front Brice Bosi took the chequered flag to the delight of his teammate Dominik Baumann and the rest of the Heico Motorsport team, who lined the pitwall to welcome their driver home. Francesco Castellacci was nearly 10-seconds behind as he struggled with his worn Michelins, just 5-seconds ahead of Claudia Huertgen's flying BMW.

The victory for Mercedes means that six different manufacturers have taken victory in the nine races so far this season – Audi, BMW, Ferrari, Lamborghini, Porsche and now Mercedes-Benz.

Dominik Baumann: “My target was only to stay on track, save the tyres, and be in the top 3. Brice did most of the race. I just had to stay behind the first two and do my race. It was very boring. He did the rest. I think my team mate pushed a bit too much in the beginning and he couldn’t set good lap times at the end, so I thought, be clever, save tyres and in the last quarter of the race, we’re the winners. I saw there were a lot of tyre punctures, only in the left rear. We were lucky that we didn’t get any. There are a lot of fast corners and breaking. It was good. This win is good for the championship. I think we were tenth, so that’s given us a boost. It’s been a while since we were on the podium, but now we’re back. I think that it’s a great pleasure to be the first Mercedes at the top of the podium, and we’re two young drivers, and it’s also great for the team and everybody. Thanks to everybody.”

Brice Bosi: “Our strategy is what Dominik said, to save tyres at the beginning of the race. We told each other, that if we can’t attack, we won’t race another car, using our tyres more than normal. That’s what I did. I was behind Francesco, and I saw that I couldn’t follow him at the beginning of my stint, and then after, I knew that the tyre would begin to be bad and that I could attack him. At the end of the race, we saw the work that Dominik do at the beginning pay off, and I had a perfect car. I closed the gap, and it was quite an easy end. This is the result of very hard work. We were on the podium at Algarve, and then we’ve had a lot of bad luck. I had my crash in Silverstone, and we were quite good at Paul Ricard, but Dominik spun and I was pushed out. The second group of drivers is quite strong, which is why in my qualifying, I’m not able to go over the top 5 times. That’s why our strategy is always in the first race, to be constant and to drive cleverly.”

Federico Leo: “I think I did a good start. The reflex on the green light was good, but I don’t know why two Mercedes overtook me so easily, maybe my start wasn’t as good as I thought. Then I stayed behind the two Mercedes for the whole race. It was very difficult for me to stay in the back, because we had problems with the front tyres. I tried to stay as close as possible to the Mercedes, and the Lamborghini made a mistake which was good for us and the championship. I tried to save the tyres and to not push too much; I knew that Francesco would want to push a lot in his group. He did very good work. Thank you to the whole team. We’re very happy with the points we took today, which are very important for the championship.”

Francesco Castellacci: “At the beginning, the car was really good; Federico gave me a good car, the tyres were really good. I was happy overtaking the Mercedes in front of me straight away. The pace was good. Then, the gap was 2.7 from them, then suddenly, the tyres dropped completely, and I was really struggling. I didn’t want to risk much, thinking of the championship, and would rather keep the 2nd place, as we’re leading with a good gap, so I didn’t try to push mush. We’re starting 4th tomorrow; it should be good as well. Also, thank you to the team.”

Csaba Walter: “I really like the track. It might be an advantage to be so close to here; I live 2 hours from here, so it’s very nice. Of course, the home race would be the Hungaroring, but I also like this track very much. The first few laps were quite heavy for me, because I had a lot of traffic at the start; I was also pushed by somebody. We survived, but we lost a few places in the first laps; it’s very hard to fight against the other cars in the long straight. Later, when others calmed down a bit, we managed to keep a good speed. I was struggling in the traffic. It could have been better for me, from my point of view, I was faster in a lot of places, but I couldn’t overtake in the straights. I didn’t want to make any mistakes or risk anything. I thought it could still be a good result for us. This is the first race for us with Michelin. If you look at the last races, you can see that we’re always suffering in qualifying; now it looks better. Of course, we had to adapt to this kind of tyres, which is very different, but it looks like it goes quite good.”

Claudia Hürtgen: “I got a really nice car from Csaba, and then I went out and pushed the car. I saw all three, and thought it looked good, and pushed until the end. I had a little fight with the Audi in front of me, and fought with a Mercedes, which was quite tough because Lunardi was coming back to overtake me. Then in this lap, I overtook the two cars, which was not boring and not easy. I think for the whole team, it’s very important, because it was a big step for us to change the tyres, because Dunlop is a really good partner of Schubert, we’ve worked together for the past 8 years, so it was difficult and hard for everybody to change. But the results show that it was okay to change, and now we will see what will happen in the last races. For us, it is quite important that Schubert are on the way to be team champions, but first I think the next few races are single races and I can fight against others and will be concentrating on that. It’s important for me to come back on the podium this year.”