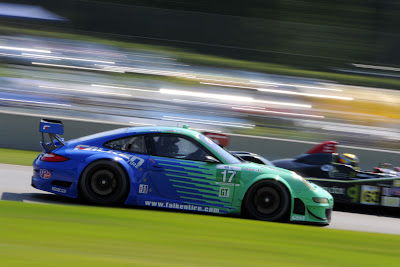 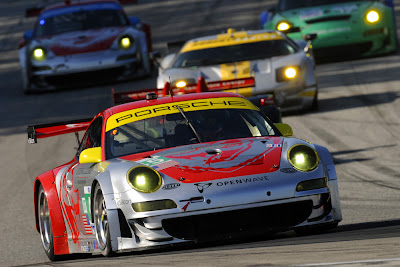 
Stuttgart. The American Le Mans Series has gained yet another attraction: On 3 September, the new urban street circuit of Baltimore in the US state of Maryland plays host to the race series with the world’s fastest sports car. Joining the action are Porsche works drivers and title defenders Joerg Bergmeister (Germany) and Patrick Long (USA), who are eager to claim their second podium result this season with the Porsche 911 GT3 RSR. Their factory pilot colleague Wolf Henzler (Germany), winner of the Mid-Ohio race, is also justifiably hopeful for a top result.

This marks the first Baltimore Grand Prix event. The American Le Mans Series is contested alongside the Indycar series, another very popular US championship, in the birthplace of baseball legend Babe Ruth. The race runs over two hours.

The new 3.219 kilometre city circuit leads through the streets of Baltimore around the Convention Centre at the inner harbour. It features twelve corners, some of which are extremely tight.

Quotes before the race

Hartmut Kristen, Porsche head of motorsport: “The first race on a new circuit is always an interesting task for drivers and teams, and even more so on a street circuit with its very special challenges. It’ll be interesting to see how our customer teams get to grips with this task. The Baltimore race with its large urban area is definitely a positive for the American Le Mans Series and a crucial step towards tapping into new markets for the series and extending the fan base.”
Joerg Bergmeister: “I’m looking forward to Baltimore. We don’t know much about the new track, and have no experience here whatsoever. But because the Indycars are driving there too, I assume that it’ll be in good condition and in this regard we don’t expect any surprises. Generally, street circuits suit us. Like at all city races, it’ll be important in Baltimore to use the short practice session well to find the best set-up for the track.”
Patrick Long: “On a new circuit we all start from scratch. That’s not only a huge
challenge for the drivers, but also for the engineers. I’m working on the basis that our Flying Lizard boys will put a perfectly set-up car on the track for us again. And then it’s up to Joerg and me to do the best we can with it.”
Wolf Henzler: “The first race on a new track is always a challenge. At the moment everything is running smoothly for us. After winning in the rain at Mid-Ohio we followed up in Elkhart Lake with our best result on a dry circuit. This shows that we’re working in the right direction. I’m heading to Baltimore feeling confident and hope that we can continue our positive trend.”

The most successful GT race car of the last years took off into the season with a raft of improvements. The output of the four-litre, six-cylinder boxer engine was increased to 455 hp (335 kW). Priority in the development of the car was given to the newly designed aerodynamics at the front and rear. In 2010, the 911 GT3 RSR again won the environmental "Michelin Green X Challenge” classification as the GT vehicle with the best overall efficiency in the American Le Mans Series.

The race in Baltimore starts on Saturday, 3 September, at 16.30 hours local time (22.30 hours CEST) and is broadcast live on the internet on www.americanlemans.com/live. The GT qualifying on Friday is shown on www.porsche.com/alms-live from 21.00 hours CEST.

The American Le Mans Series (ALMS) was created in 1999 for sports prototypes and GT vehicles. The regulations correspond to those of the Le Mans 24 hour race. All classes start together but are classified separately:
GT class: This most popular class amongst car manufacturers is traditionally extremely well supported: Slightly modified standard sports cars with 440 to 500 hp and a minimum weight of 1,125 – 1,325 kilograms (e.g. Porsche 911 GT3 RSR).
GTC class: This class is reserved for vehicles from one-make race series (e.g. Porsche 911 GT3 Cup).
LMP1 class: Sports prototypes with up to 550 hp and a minimum weight of 900 kilograms.
LMP2 class: Sports prototypes with ca. 440 hp and an 825 kg minimum weight.
LMPC class: Prototype brand trophy series for the ORECA FLM 09.