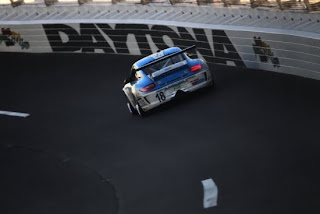 Francorchamps – Cape Coral – Daytona: The Spa-Francorchamps, Belgium based Mühlner Motorsport Team had already been looking since several years to participate in the Rolex 24 at Daytona but this is not as easy to manage. Finally in October 2010 the lights were switched on green: Muehlner Motorsports America, LLC was founded in November and a brand new Porsche MY2011 was bought at Porsche Motorsport of North America (PMNA). Already in early December the team participated in a Continental tire test at the Homestead Miami Racetrack.

It was Jörg Bergmeister who did the shake down, and everybody could easily see that the car was directly up to speed. Mark J. Thomas, a regular in Mühlner Motorsport programmes since 2008, was involved in the project right from the beginning. After the successful Homestead shake down Peter Ludwig signed immediately and two weeks later also Dion von Moltke became part of the driver line up. In early January the team participated in the official test the so called "Roar before the 24" and worked hard to be prepared for this new challenge: the Rolex 24 at Daytona. It is the 35th 24h race in the long history of Mühlner Motorsport, but it was the first race ever in the USA for the successful team that participated already in races in 17 countries around the world. One week before the event Cory Friedman joined the team and so the driver line up was finalized with very reliable and -in Daytona- experienced amateur drivers.

Because the team has been able to finalize the complete test program during the test days in early January, team manager Bernhard Mühlner decided that during the practice and qualifying sessions only the absolute minimum laps to fulfil the regulations had to be done. Thursday and Friday were very quiet and Ludwig was the driver who qualified the car on position 21. This was ok because the starting position in a 24h race, will never affect the result. According to the regulations, the driver who qualified the car has to take the start.

The team decided that the drivers should do double stints to save time in the pits. During the first stint this strategic plan didn't pay off because Ludwig was a little bit too careful, when he meant that during a caution period, the car felt a little bit different for him. So he decided to come into the pit, because he was afraid of a slow puncture. But this was not the case, the tire pressure only came down because of the slow driving behind the safety car and so the team lost a lot of positions, already early in the race. The following stints worked perfect, all drivers did double stints and half way the race the team was already 7th out of 32 GT cars. Not by doing the fastest lap times but by taking advantage of the reliability of the car and cool strategy from the pits.

But then Thomas, in his second time in the car, hit the wall in turn one and the complete front and both right wheels and the axles behind were destroyed but the mayor difficulty was the broken radiator. The only good thing was that he was able to bring the car back to the pits. Although the Mühlner Motorsport mechanics did a great job to fix everything, it took 42 minutes and all chances for a possible podium finish were gone half way the race.

When the car rejoined the track, a very long caution period (2h 47min), because of fog early in the morning, was not really helpful to regain positions by the reliability of the car and the strategy of the team. At the end of the race car #18 finished 9th of all the GT's because during the whole race no technical problem caused an additional pit stop.

Renate-Carola Mühlner quotes after the race: "It makes me very proud that in our 35th 24h race again no technical problem happened to our car. With the exception of the accident we only refuelled the car, changed the tires and only once the brake pads thanks to the high quality of the Pagid brake pads. Our Bilstein suspension worked perfect throughout the race, and our mechanics did again a great job to prepare the car in a way that no technical problem stopped us during the race. They also did perfect and fast pit stops even though the way to do this was totally new for us because of the regulations in Daytona, which are totally different than in all the other 34 24h races we did before. Although you can't think like this everybody can easily calculate on what position we could have finished the race if the accident wouldn't have happened. But we will come back…"