Double victory for Porsche at long distance classic in Florida 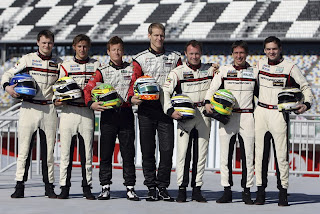 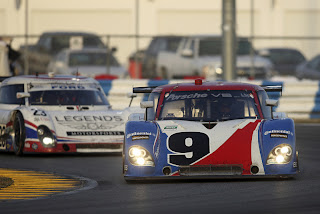 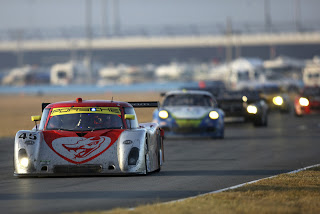 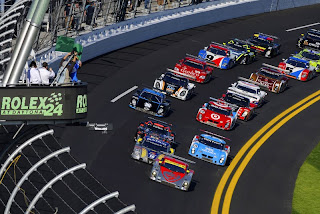 Double victory for Porsche at long distance classic in Florida

Stuttgart. Porsche’s success story at the Daytona 24 hour race continues. At the 49th running of the long distance classic in Florida, the sports cars from Zuffenhausen celebrated an impressive double victory. Porsche works driver Wolf Henzler (Germany) won the strongly-supported GT class with his American teammates Andy Lally, Spencer Pumpelly, Steven Bertheau and Brendan Gaughan at the wheel of TRG Racing’s Porsche 911 GT3 Cup. Despite starting from the back of the grid, they finished the race one lap clear of the Paul Miller Racing squad with Bryce Miller, Tim Sugden, Bryan Sellers and Rob Bell. For Porsche as the most successful manufacturer in the history of this race, this marked the 73rd class win.

“I’m thrilled to have won such a fabulous race for the second time since 2005,” said Wolf Henzler. “It was very tough fighting our way through the field. But our car was perfectly prepared and we were able to maintain our quick pace from start to finish.” For the Porsche factory pilot, this was his third straight win at a 24 hour race after Le Mans and Spa.

Porsche works drivers Richard Lietz (Austria) and Marco Holzer (Germany), sharing driving duties with Americans Craig Stanton and John Potter in the 911 GT3 Cup of Magnus Racing, made the start of the 2011 motorsport season perfect for Porsche with fourth place. After leading the field with the Brumos-Porsche, works driver Marc Lieb and his American teammates Hurley Haywood, Leh Keen and Andrew Davis lost positions during the night after an off-excursion damaged the radiator. After a dramatic start and a gripping race, thick fog brought out the safety car for a good two and half hours in the early morning. The pilots put in an impressive charge and profited from the speed and reliability of the 911 GT3 Cup to clinch fifth.

“Our Porsche 911 GT3 Cup ran perfectly,” said Marc Lieb. “We had a good chance to win. But in such a top-class field you simply can’t afford any lengthy repairs in the pits,” Richard Lietz: “As the old saying goes: A miss is as good as a mile. Still, we can be happy with fourth.” His teammate Marco Holzer agreed: “My second Daytona race went much better than my first last year. So my aim for 2012 is clear: I’m after the podium.”

Porsche works driver Joerg Bergmeister (Germany) provided the first highlight on the Daytona International Speedway. After claiming pole position with his strong performance and a new lap record, he pulled clear of his rivals at the start of the race. With the Porsche-Riley, the overall Daytona winner from 2003 built up his advantage to 16 seconds by lap 27 before the first pit stop, and in the meantime turned the fastest lap of the race. His works driver teammate Patrick Long (USA) was running in second place when he handed the Flying Lizard Motorsports’ Daytona prototype powered by the Porsche six-cylinder engine over to Seth Neiman (USA). After just a few laps, in an attempt to avoid a spinning competitor in front of him, Neiman left the track and damaged the underbody and radiator. The team lost 19 laps through essential repairs. Ninety minutes before the flag, an oil cap on the left side of the engine came loose and the leaking oil caught fire. Repairs at this late stage made little sense.

“We were completely satisfied with the performance of our car over the entire weekend,” said Joerg Bergmeister. “We clinched pole position and turned the fastest race lap. Unfortunately, we lost a great deal of time early on in the race. At the end a fire caused by leaking oil signalled an early retirement for us.” Patrick Long said: “To now, Flying Lizard has had no experience with the Daytona prototype. Still, everyone became familiar with it very quickly. It’s just a shame that they couldn’t reap the rewards for all their hard work at the end.”

In the overall classification, the best placed Porsche-Riley finished third with Joao Barbosa (Portugal), Christian Fittipaldi (Brazil), Max Papis (Italy) as well as Americans Terry Borcheller and JC France. The power-unit of the Daytona prototype fielded by Action Express Racing was a privately-developed eight-cylinder engine based on the Porsche Cayenne. The sister car, which had led on and off over the distance, saw the chequered flag in ninth place.

“Again this year, Porsche teams have made an indelible mark on the Daytona 24 hour race,” summarised Porsche’s Head of Motorsport, Hartmut Kristen. “The double victory in the GT class was well earned. My big compliments for the professional preparation. Flying Lizard Motorsports also gave a sensational performance at their Daytona campaign.”