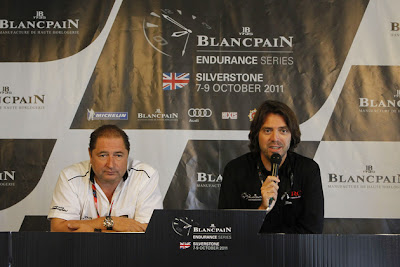 In a joint press conference held at Silverstone, SRO Motorsports Group CEO Stephane Ratel and Vice President of Blancpain SA Alain Delamuraz presented the next stage of the evolution of the Blancpain Endurance Series. Building on the success of the five event inaugural season, the plans for 2012 include an extra high profile race meeting, the launch of the SRO Supercar Club and an exciting new package of GT races that will be part of each of the six events on some of the most exciting circuits in Europe.

The 2012 Blancpain Endurance Series calendar will have an additional 3-hour race and take place on six Grand Prix circuits across Europe. With the exception of the Total 24 Hours of Spa, each of the meetings will be held over two days.

The actual dates will be confirmed once the calendars for the FIA GT World and FIA GT3 European Championships have been finalised so as to avoid any clashes of dates between these important SRO promoted international GT Championships. Date clashes with the Avon Tyres British GT Championship and, possibly, the ADAC GT Masters will also be avoided to allow teams the possibility of entering both their national championship and take part in one or more of the international series.

The prestigious Lamborghini Blancpain Super Trofeo is likely to race at most of the six rounds in 2012 and provide a fantastic focal point for the GT support package at the Blancpain Endurance Series weekends.

In addition to the Lamborghini Blancpain Super Trofeo, Stephane Ratel unveiled the Blancpain Revival Series, a link with the recent past that will allow enthusiastic amateurs to have their own place within the Blancpain Endurance Series meetings. It will be a series reserved for GT cars which raced between 1994 and 2004 and will be co-organised with a promoter specialising in historic cars. An innovative format with free practice, qualifying and a 45-minute race all taking place on the Saturday of each meeting.

A programme for owners of the most exclusive and authentic Supercars, that is all about enjoyment at each of the six race weekends in 2012

For an annual subscription each owner can enjoy:

- Lunch in the hospitality unit

- VIP parking in the paddock

- Two hours of track time on the Sunday

In addition they will be invited to take part in the “RACB GT PARADE” during the Total 24 Hours of Spa and in an annual Supercar Rally.

Stephane Ratel, CEO of SRO Motorsports Group, said: “Launched in 2011, the Blancpain Endurance Series is the result of twenty years of motorsport experience built up by the SRO Motorsports Group. The recipe for 2011 was quite simple: to bring GT3 cars to endurance racing, by setting up a convivial championship which met the requirements and expectations of teams and drivers alike. Simplicity, technical competence, a rigorous sporting environment, excellent organisation, an attractive calendar and top-quality TV production allowing pan-European live broadcast: these were the priorities of the first season.

“In 2012, under full acceleration, this new reference in GT racing, which has quickly become known as the ‘Blancpain’ in the paddocks, will move to a new level. More competitors, more diversity, more events…

“As a reflection of their prestigious title sponsor’s market position, the race meetings will become a cosmopolitan public relations platform, exclusive and convivial, built around a stable programme of complementary series, racing on the most beautiful European circuits.”

Alain Delamuraz, Vice President of Blancpain SA said: “Blancpain is proud and happy to confirm their large support for motorsport in general, and for SRO in particular. The immense success we have seen with the Blancpain Endurance Series proves that we were right to believe in this return to the roots of the true spirit of GT racing, namely a mix of professional and amateur drivers, with numerous makes of car, competing in endurance races.

“Blancpain, the oldest watch brand in the world, shares in the watchmaking art the same values of the respect of traditions and heritage as those shown by the world of GT racing. That is why we are pleased to confirm our strong presence for 2012 as partners and timekeepers.”

Blancpain, a tradition of innovation for over 275 years

In 1735, Jehan-Jacques Blancpain began his watchmaking activity and installed his first workshop on the upper floor of his family home in Villeret, a village in the Swiss Jura mountains. By inscribing his name in the official communal property register, this pioneer created an establishment that is now the world’s oldest watch brand.

Throughout its history, Blancpain has succeeded in maintaining solid continuity in its capacity for innovation and its respect for traditional horological values. Whether by perfecting complications, designs and production methods, or by exploring new horizons, the Manufacture has been devoted for more than 275 years to taking the art of watchmaking to places it has never yet ventured. From the first models created in the 18th century to the prestigious timepieces currently emerging from its workshops, Blancpain has forged an authentic tradition of innovation. The key to its success lies in the mastery of all fields involved in making an exceptional mechanical timepiece – from the creation of the movement and its components through to the functional design of the watch, along with the choice of materials and the extremely refined and entirely hand-crafted finishing.

Without ever straying from its precious heritage, the brand steadfastly pursues its quest for performance, precision and elegance by offering a range of exceptional timepieces equipped with the most sophisticated horological complications. The nature of its collections – including the pure lines of the Villeret, the efficient complexity of Le Brassus, and the avant-garde design of L-evolution – is firmly rooted in watchmaking traditions while constantly pushing them towards new limits. In the same way, the ladies’ collection celebrates beauty and refinement, while the Sport collection is composed of instrument watches that are ready to face any situation on land, under water or in the air.

While remaining unswervingly loyal to its values, Blancpain regularly associates with partners that share its passion for excellence. Whether in the field of motorsports, sailing, scuba diving, or that of gastronomy and the art of living, the Manufacture is proud of its partnerships that represent far more than mere co-branding. On the contrary, Blancpain commits itself fully to such forms of cooperation by joining forces with its partners in a determination to excel and to foster both creativity and authenticity.