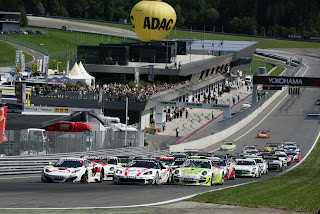 
As in previous years, the 2013 ADAC GT Masters will be contested over sixteen rounds on eight race weekends at various tracks in Germany and neighbouring countries. The series goes into its seventh season with two new venues giving added spice to the calendar. As usual, the Super Sports Car League tours all five race tracks in Germany, but this year also ventures across the border to Belgium (the Formula 1 circuit at Spa-Francorchamps) and to Slovakia (the Slovakiaring).

The season opener of the 2013 ADAC GT Masters takes place over the weekend of 26th - 28th April, and in keeping with tradition, is hosted by the Motorsport Arena Oschersleben. This will be the sixth year in succession that the ADAC GT Masters has got underway at the circuit near Magdeburg. On the weekend of 10th - 12th May, fans will then be making their way to Belgium for the very first races in the history of the series to be staged on the 'Ardennes rollercoaster' at Spa-Francorchamps.

In Mid-September, Slovakia will host the ADAC GT Masters for the first time. The Slovakiaring has been chosen to host the penultimate event of the 2013 season, on the weekend of 13th - 15th September. The circuit is located 36 kilometres outside the capital city Bratislava and was opened in 2009. The grand finale is scheduled for 27th - 29th September at the Hockenheimring Baden-Württemberg. Also pencilled in on the calendar are the customary visits to the Sachsenring (7th - 9th June), the Nürburgring (19th - 21st July) and the Lausitzring (30th August - 1st September).


Provisional dates and venues for the 2013 ADAC GT Masters season: