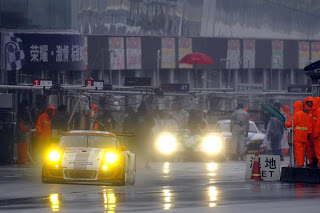 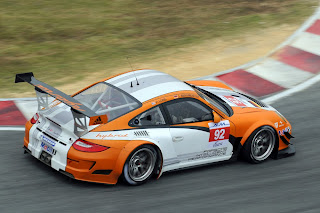 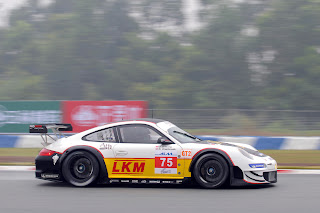 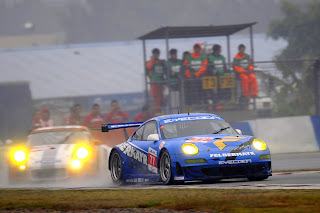 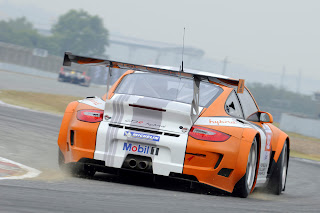 Stuttgart. A good start for the Porsche 911 GT3 R Hybrid at its eagerly awaited premiere in Asia. In qualifying for the season finale of the Intercontinental Le Mans Cup in Zhuhai/China, Porsche works driver Joerg Bergmeister (Germany) turned the second fastest lap of all GT vehicles in the innovative sports car from Weissach in 1:33.789 minutes – just two-tenths of a second shy of the top time.

“We’ve further improved the car since the last race in Road Atlanta, and we profited from this today,” said Joerg Bergmeister, who shares driving duties for the 1,000 kilometre race on Sunday with his works driver teammate Patrick Long (USA). On the 4.319 kilometre Zhuhai International Circuit, the 911 GT3 R Hybrid, which, with its groundbreaking drive concept, is not eligible to earn points in the GTH class, benefitted from the improved torque vectoring and the auto-boost. The torque vectoring distributes the torque depending on the radius of the corner and the driving situation between the left and right front wheel. The auto-boost controls the electrical power under acceleration out of the corners. Joerg Bergmeister, who clinched the GT title of the American Le Mans Series for the second consecutive time with Patrick Long, said: “Thanks to the auto-boost, we’re practically driving 4WD and that was definitely an advantage today on the somewhat damp track. In addition, the Michelin tyres suit our car very well.”

In the GT2 class, Porsche works driver Richard Lietz (Austria) posted the second quickest time with the 911 GT3 RSR fielded by the Felbermayr-Proton team. In the race he receives support from his factory driver colleague Marc Lieb (Germany), who successfully defended his GT2 title in the Le Mans Series this season. “The track got consistently faster and I turned my quickest lap right at the end. Things look good for the race,” he said. His compatriot Martin Ragginger contested the qualifying in Felbermayr-Proton’s second 911 GT3 RSR and was also satisfied with his sixth fastest time: “My last laps, when the track was almost dry, weren’t particularly great, otherwise I would have been a bit quicker. Still, we’re feeling optimistic.” His teammates are Christian Ried (Germany) and Gianluca Roda (Italy).

Former FIA GT champion Richard Westbrook (Great Britain) planted his 911 GT3 RSR of Prospeed Competition, which he shares with Darryl O’Young (Hong Kong), on the fifth spot in the GT2 class. The double Supercup winner also takes up the race feeling confident: “We aren’t that far off the quickest and over the distance have a good chance to bring home a top result.”

This is the Intercontinental Le Mans Cup

The newly inaugurated Intercontinental Le Mans Cup (ILMC) is open for sports prototypes and GT vehicles, with the regulations based on the rules of the Le Mans 24 Hours. Three long distance races are on the ILMC calendar this season: the 1,000 kilometres of Silverstone (Le Mans Series), the Petit Le Mans in Road Atlanta (American Le Mans Series) and the 1,000 kilometre race in Zhuhai/China.

All race cars start together but are classified separately. Points for manufacturers and teams are allocated for placings in each class.


Info and Fotos: Porsche Motorsport/ for Autorized and acreditated Press Services.
Posted by AmigosRacing/MRS GT. at 16:38