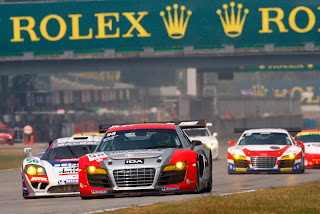 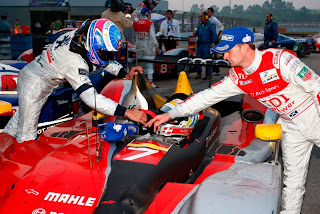 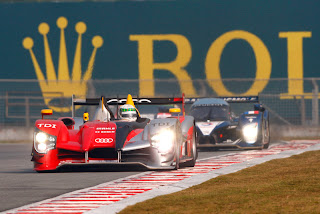 Ingolstadt/Zhuhai, November 7, 2010 - Audi Sport Team Joest thrilled the fans on its first showing in China with a fantastic season finale of the sports prototypes at Zhuhai. However, a controversial final phase deprived Audi of the victory the brand would have actually deserved.

During the entire 1000-kilometer race Tom Kristensen/Allan McNish and Dindo Capello/Romain Dumas at the wheel of the two Audi R15 TDI cars fought a fascinating duel with the two Peugeot 908 cars. One hour before the end, Tom Kristensen and Allan McNish were clearly leading the race when the only safety car period caused their advantage to shrink from over 30 to 13.5 seconds.

Afterwards the spectators witnessed a sprint race in which every tenth of a second counted. Accordingly, Tom Kristensen was very surprised when immediately before the last refueling stop of his direct rival in the Peugeot, Stéphane Sarrazin, he was slowed by Sarrazin’s team-mate Sébastien Bourdais, who was running as much as three laps behind. This allowed Sarrazin to come back out after his last refueling stop with a one-second advantage over Kristensen and to ultimately win the race with a 4.8-second lead.

The controversial "teamwork" deprived the Chinese fans of a true final shoot-out. Nonetheless, they witnessed the performance capability and reliability of the two Audi R15 TDI cars that were equal and at times superior to the competition in the race that took place in warm humid weather and temperatures of 26 degrees in the shade. The strategy of changing the tires at each pit stop after the second hour of the race proved to be right. The Audi drivers were able to take advantage of the fresher tires again and again and made up the time lost in the pits after each change. In the crucial phase of the race Allan McNish and Tom Kristensen managed to distance themselves from their immediate rivals before the deployment of the safety car one hour before the end of the race thwarted their plans and forced them to settle for second place by a narrow margin. Dindo Capello and Romain Dumas occupied third place.

The finale of the Intercontinental Cup was the last race of the Audi R15 TDI in its current technical configuration. From 2011 onward, new Technical Regulations which prescribe a downsizing of the engines will apply to Le Mans prototypes. The successor model, the R18, will be presented in December.

The Audi R15 TDI competed in a total of nine races in 2009 and 2010. Three of them were victorious. The innovative diesel sports car secured its place in the history books primarily due to its one-two-three victory at the 2010 Le Mans 24 Hours, the fastest Le Mans race of all time.

The Audi R15 TDI was developed, among others, in cooperation with Bosch, a major and long-standing innovation partner of Audi’s. Both companies pursue similar aims through their motorsport commitments: the development of optimal solutions for motorsport based on volume-production technology. Gasoline direct injection and diesel injection technology are good examples of these endeavors. In 1989 Bosch and Audi launched the world’s first diesel engine with direct injection and turbocharging technology on the market in the Audi 100 TDI. This technological strategy laid the foundation for the success story of today’s diesel engines - in production cars as well as in motorsport.

Zhuhai was also the first race in a Le Mans Series to see the fielding of the Audi R8 LMS. Marchy Lee, Alex Yoong and Mathew Marsh from the KK Performance team managed to clinch twelfth place overall and victory in the GTC class.

After the Audi R15 TDI and the Audi R8 LMS the Chinese spectators will soon be able to witness the Audi A4 DTM in action as well: on November 28, the finale of the DTM will be held on the city street circuit in the financial center of Shanghai.

Dr. Wolfgang Ullrich (Head of Audi Motorsport): "We came very close to winning the race. Unfortunately, there was a safety car period in the final phase which caused us to lose a large portion of the advantage again which we had achieved. After the final pit stop we caught the second Peugeot that was no longer in contention for victory but that held up Tom (Kristensen) for several laps nonetheless. Tom also ruined his tires in the process. When he finally got past the Peugeot it was no longer possible for him to win the race. In our opinion this was not a particularly fair action on the part of our competitor but, unfortunately, things like these happen in motorsport. For us, it was important to deliver a fantastic race to the Chinese spectators and we managed to do this. To capture hearts and market share it is not necessary to win a race at all cost. Now we’re looking forward to the DTM finale in Shanghai."

Tom Kristensen (Audi R15 TDI #7): "It was a very challenging race for Audi Sport Team Joest at Zhuhai. The start was a little bit funny. One of the Peugeots was already gone before we were allowed to go. This was strange. We had some guesses to do on the setup because of the two days of rain. Nevertheless the car was quite good but the ‘green’ circuit did not allow us to do two stints. I stopped with almost no more rubber left. From then on Allan (McNish) just single-stinted the tires which he did brilliantly and brought us back in contention. When I got back in the car everything was going really well. With the lead we had, the safety car killed us. From then on it was really tough. Driving behind Bourdais I noticed how much the aero upsetted my car. And I also had a front left slow puncture. Wen I got clear with only four laps left it was not possible for me to regain what the sister car gave to Sarrazin. It could have been a great finale of another great year if I had been in the lead where I deserved to be and fighting with Sarrazin to the flag. Now it was a little bit different but nevertheless an end of a great sesaon. Winning Le Mans this year was very good for Audi. I hope we can keep having real fights with Peugeot in the future."

Allan McNish (Audi R15 TDI #7): "It was a very exciting race. After having such wet test sessions the engineers gambled a little bit with the setup and they gambled in the correct way. The car handled pretty well all the way through the race and came to us as the race progressed. Dindo (Capello) and Tom (Kristensen) were able to mix the Peugeots at the start of the race. We changed the strategy and went to three single stints for me in the middle of the race. This was a better way to run it. Torwards the end Tom was pushing really hard and we were in the lead. Unfortunately we had a little bit of blocking from the other Peugeot which was out of contention. This was an era which was a little bit frustrating. But it is the way it goes. The Pace Car took away the 30-second lead we had. I was pleased with the team’s performance, with the car and mine and Tom’s performance. It was just disappointing the race ended a little bit under a cloud."

Dindo Capello (Audi R15 TDI #8): "An exciting start of the race. Then our setup was a little bit hard on the rear tires. At the beginning we decided to double stint the tires. Looking back this was a mistake because I had no more rubber left on the rear left tire. That’s why from the next run every driver was only doing one stint with each set of tire. A part from that the car was quite good but a little bit inconsistent. It was difficult to judge. From my side it is good we did a podium again - as I did in all races I did with the R15 TDI this year."

Romain Dumas (Audi R15 TDI #8): "Dindo (Capello) was doing great in the beginning. We thought that we’d have a good chance. Unfortunately, we changed the setup of the car after the warm-up. The car was good on fresh tires but not on used ones in the second part of the stint. It was too hard on the tires; that’s why we lost some time in each stint. We weren’t really able to fight with the front runners. The level was extremely high. We were only able to make up some ground to our sister car in the end due to the safety car."

Ralf Jüttner (Technical Director Audi Sport Team Joest): "That was really exciting - albeit with a result that spoils my good mood. In all fairness, I’ve got to say that at the race’s midpoint I was expecting us to be clearly beaten here. I can only praise the drivers and our two crews here who continually managed to put us back into contention again. At the pit stops we were again clearly faster than Peugeot - and we had to be, too, because we changed tires more frequently. That we managed to stay on their heels so closely was only possible because the crews were incredibly good and the drivers really made good use of the tires. So when our hope of winning this race came up, it was really justified. The most hurting thing for us was the caution period. The 30 seconds we had would have been enough for us. But afterwards we only had eleven and that was simply not enough. That Bourdais then drove in front of Tom’s (Kristensen) car and slowed him so that the other car could come back out of the pits in front of him wasn’t so nice. I don’t think we’d do something like this. Still, for the spectators it was a great race."