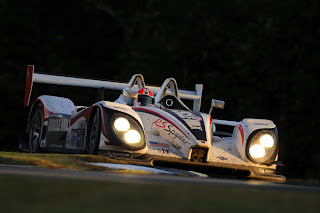 Stuttgart. A successful conclusion to the American Le Mans Series season for Porsche: With the Porsche 911 GT3 RSR, Porsche works drivers Joerg Bergmeister (Germany) and Patrick Long (USA) clinched the GT2 class title, like last year, at the 1,000 mile classic on the established Road Atlanta circuit. The 911 GT3 RSR, with which Porsche has already won the European Le Mans Series this season, was not only the most successful racer in the USA, but also by far the most efficient GT vehicle of the year: With the sports car from Weissach, Porsche also secured overall victory in the environmental Michelin Green X Challenge.

“It’s fantastic to have defended the title after such a tough season,” said Porsche’s head of motorsport Hartmut Kristen. “The situation was extremely tight in the team and manufacturers’ classifications. Unfortunately we didn’t win here. Six cars crossing the finish line within one minute at a 1,000 mile race gives a clear indication of just how competitive the entire 2010 season was. Winning the Green X Challenge, which was very important to us, shows that the Porsche 911 is not only fast but is, at the same time, very economical.” 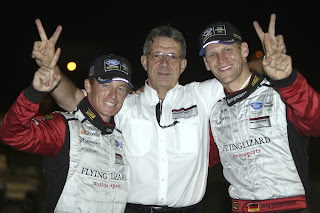 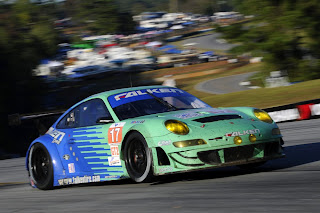 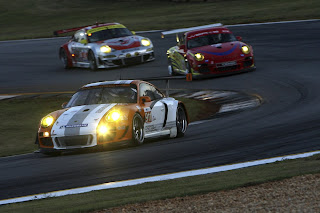 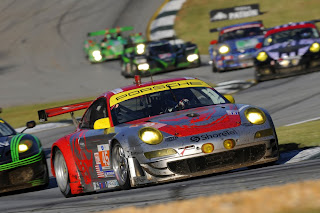 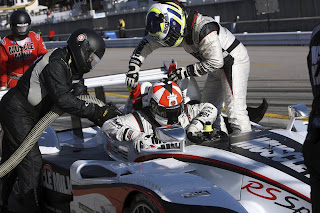 After four wins this season against strong opposition from BMW, Ferrari, Chevrolet and Jaguar, the main priority for Joerg Bergmeister and Patrick Long was to defend their points’ advantage on the demanding 4.087 kilometre race track in the US state of Georgia. With support from their factory driver colleague Marc Lieb (Germany), the newly-crowned champion of the Le Mans Series, they followed through on this strategy. The 911 GT3 RSR fielded by Flying Lizard Motorsports completed the second longest race of the American Le Mans Series after the 12-hour classic in Sebring without any problems. For Joerg Bergmeister, this marks his fourth title for Porsche in the race series featuring the world’s fastest sports cars, and his third with Patrick Long.

“Looking back at the championship, we tried right from the start to keep out of any precarious situations,” said Joerg Bergmeister. “This plan worked perfectly. The title is very valuable because we won four races against the toughest rivals and our teamwork was the most consistent. The competition this season in the GT class of the American Le Mans Series was the hardest I’ve ever encountered.”

For Patrick Long, this title is particularly precious. “Eight cars were good for wins this year, that’s more than ever before,” he said. “If you want to dominate in this high-class field, you can’t afford to make one mistake. Our car was an important factor. The Porsche 911 was by far the most reliable in the field.” Marc Lieb added: “I’m pleased with how everything went today. It’s always a huge responsibility to help out as the third driver, particularly when it’s about the championship. Often we held back to avoid any risks and through this we lost a lot of time in traffic. But our cautiousness paid off today.”

One of the many highlights of this gripping season final was the race premiere of the Porsche 911 GT3 R Hybrid in the USA, which received huge public interest. The sports car with ground-breaking drive technology and the Le Mans winners Timo Bernhard (Germany), Romain Dumas (France) and Mike Rockenfeller (Germany) at the wheel again demonstrated its reliability, performance and efficiency. Competing in the unclassified GTH class for experimental cars, it conquered the 1,000 miles on this difficult circuit without any technical problems. For the Porsche engineers, this test outing yielded many crucial insights in order to further perfect the innovative hybrid drive.

“My job at the wheel of our rolling laboratory was a great experience for me,” said Porsche works driver Timo Bernhard. “The hybrid system worked perfectly over the entire race distance. We achieved two important goals, and these were to present this unique car to the US fans and to further develop the hybrid drive under racing conditions.” His factory pilot teammate, Romain Dumas, commented: “I’m pleased to have reached the finish line without any problems. Unfortunately, several punctures cost us a lot of time today. Still, it was a fantastic experience, because over the whole weekend the fans celebrated us like winners.” Former Porsche works driver, Mike Rockenfeller, who now drives for the Audi factory, also enjoyed this enthusiasm: “It was great to be back in a Porsche. I received a very warm welcome and felt right at home straight away. Thank you to Audi and Porsche for making it possible to be part of this extraordinary project.”

“Once again we learned a lot from racing our hybrid car,” summarised Hartmut Kristen. “I’m proud that this innovative system ran over nine hours without a single problem. From our standpoint, it is equally as important that our development engineers have again collected a huge amount of important data.”

In the LMP2 sports prototype class, the Porsche RS Spyder also underlined its resounding successes of the season at the final in Road Atlanta. Fielded by Muscle Milk Team Cytosport, the winning racer from Weissach netted second place with the all-German driver line-up of Klaus Graf, Sascha Maassen and Lucas Luhr. After winning the prestigious Sebring 12 Hours as well as at Lime Rock and Mosport, regular pilot Klaus Graf and Porsche also secured second place in the championship.

“What a fantastic year. Three wins and numerous podium results are a great success for the whole team,” said Klaus Graf. “The Porsche RS Spyder is so much fun to drive. Today we experienced a couple of problems. But to finish second, despite the troubles, can only happen with a Porsche.”

At his maiden race in the American Le Mans Series, Porsche-Junior Marco Holzer (Germany) occupied ninth place in the second Flying Lizard Motorsports Porsche 911 GT3 RSR which he shared with Americans Seth Neiman und Darren Law. “My ALMS debut was a super experience for me,” he said. “The Road Atlanta track is one of the most beautiful that I’ve ever driven on. I’m grateful to have had the chance to work with Flying Lizard, probably the best GT squads in the USA.” In the cockpit of the Porsche 911 GT3 RSR run by Falken Tire, former Porsche-Junior Martin Ragginger (Germany) and American Bryan Sellers finished tenth.

In the GTC class, Jeroen Bleekemolen concluded his successful season with another highlight. The double Porsche Supercup champion from the Netherlands joined forces with American Timothy Pappas in the Porsche 911 GT3 Cup to celebrate his first title victory in the USA. 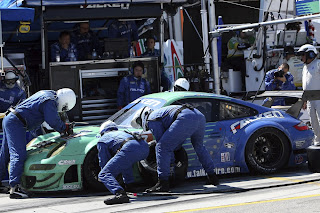 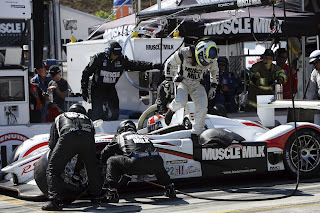 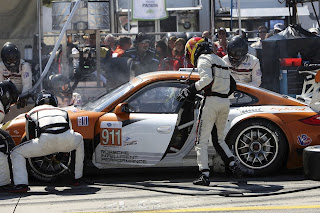 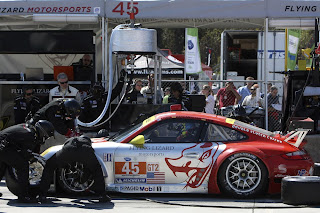 The American Le Mans Series was created in 1999 for sports prototypes and GT vehicles. The regulations correspond to those of the Le Mans 24 hour race. Nine races in the USA and Canada make up this year’s calendar. Traditional highlights are the Sebring 12 hour race and the 1,000 mile “Petit Le Mans” at Road Atlanta.

Sports prototypes and standard sports cars make up the starter field: Like at season-opening Sebring race, at the “Petit Le Mans” they are divided into five classes:
LMP1 class: Sports prototypes with up to 750 hp and a minimum weight of 900 kilograms (petrol engines) or 930 kilograms (diesel engines).
LMP2 class: Sports prototypes with around 440 hp and an 825 kilogram minimum weight (e.g. Porsche RS Spyder).
GT2 class: Slightly modified standard sports cars with 440 to 460 hp and a minimum weight of 1,125 – 1,325 kilograms (e.g. Porsche 911 GT3 RSR).
LMPC class: This newly-created class is a prototype brand trophy series for the ORECA FLM 09.
GTC class: Replacing the ALMS Challenge, this class is for brand trophy series vehicles of all manufacturers (e.g. Porsche 911 GT3 Cup).

All race cars start together but are classified separately. This ensures racing that is exciting and constantly changing. Points are awarded only for placings in each class.