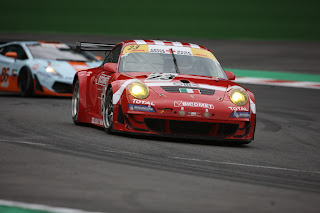 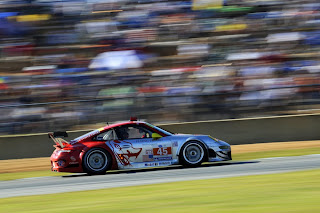 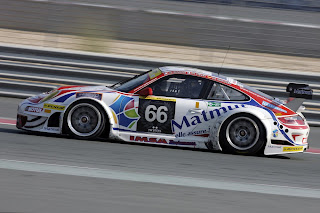 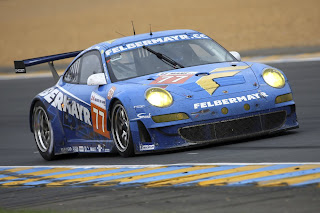 Stuttgart. Once again, the Porsche 911 GT3 RSR is the world’s most successful GT race car. The fastest racing-911, developed following the rules of the GT2 category and based on the principles of Porsche Intelligent Performance, left its mark on race tracks around the globe with good lap times, excellent reliability and particularly low fuel consumption. Powered by a 450 hp four-litre six-cylinder boxer engine, the vehicle triumphed in the GT2 category in 2010 at the Le Mans 24 hour race, won championships in the Le Mans Series and the American Le Mans Series and claimed overall victories at the 24 hour races in Dubai and Spa-Francorchamps. It won against strong competitors including Ferrari, BMW, Aston Martin,

The Porsche 911 GT3 RSR, based on the road-legal 911 GT3 RS, not only impressed with race wins. In the American Le Mans Series, it was once again the GT vehicle with the best overall efficiency in the ratio of lap times and fuel consumption. For this, the vehicle was the overall winner of the environmental Michelin Green X Challenge for the second time in succession. And at the Le Mans 24 Hours, the RSR also won the Green X Challenge. “It’s giving the right signal to place more importance on the efficiency of a racing car,” says Hartmut Kristen, Head of Porsche Motorsport. “Winning the Green X Challenge, which is a very important success for us, proves that the Porsche 911 is not only fast, but also very economical.”

In its current form, the Porsche 911 GT3 RSR of the 997 type has been sold to international customers since 2007. From year to year, the top model of 911 racing vehicles received ongoing modifications. The most conspicuous changes were made to the 2009-model. The capacity of the six-cylinder boxer engine at the rear grew from 3.8 to 4.0-litres, resulting in an optimised torque curve at reduced revs as well as better driveability. The most distinguishing feature of the still current 911 GT3 RSR is the redesigned front section with a large ventilation opening. Noticeable at first sight are the air outlet slots, the so-called louvers, on the front hood. They are an indication of the completely revamped air ducting of the radiators, which became necessary through the new design of supply and discharge air with the installation of an optional air-conditioning unit. The aerodynamics under the rear underwent further optimisation. The rear wing now features a wider adjustment range. Compared to the 2008-model, the weight-optimised brake system and the lighter wiring harness contribute to further improved driving dynamics.

A great deal of know-how from the successful RS Spyder sports prototype went into the gearbox of the 911 GT3 RSR. The sequential six-speed gearbox developed by Porsche engineers is considerably lighter than the unit fitted in the predecessor and has much less internal friction. The flatter angle to the drive shafts allow teams greater scope for the suspension set-up.

The foundation for today’s successes was already laid with the racing variants of the Porsche 911 996 type. Built to contest the GT class of the Le Mans 24 Hours, the 911 GT3 R clinched virtually all GT class wins in the 1999 American Le Mans Series. In 2001, the modified 911 GT3 RS version was raced. This vehicle was not just successful in its class, but also celebrated prestigious overall wins, with the two German Porsche works drivers Joerg Bergmeister and Timo Bernhard an team owner Kevin Buckler beating significantly more powerful prototypes at the Daytona 24 hour race in 2003. Porsche factory pilot Marc Lieb (Germany) won the 24 Hours of Spa with Romain Dumas (France) and Stéphane Ortelli (Monaco) in the same year beating all the much more powerful GT1 cars.

In the 2004 season, the successor model 911 GT3 RSR (996) made its debut. The output of its 3.6-litre six-cylinder boxer engine increased to 455 hp (335 kW) at 8,500 rpm, the maximum torque to 410 Nm at 7,200 rpm. By winning the American Le Mans Series (GT class), the Le Mans Endurance Series (GT) as well as the FIA GT Championship (N-GT), as well as class victories at the Le Mans and Spa 24 hour races and the Petit Le Mans event, the new racing sports car celebrated a brilliant debut season.

“It’s impressive how the 911 GT3 RSR has developed from year to year. The lap times alone are astounding, because despite the restrictions imposed on us again and again by the regulations, the car just got faster every year,” says Porsche works driver Joerg Bergmeister, who celebrated the majority of his successes at the wheel of the RSR. For this reason, the five-time winner of the American Le Mans Series is not at all anxious about tackling the 2011 season: “When you finish a season you always think: now we’ve reached our limit, now the car’s gone as far as it can go. And then Porsche comes up with something new again. And I reckon it won’t be any different in 2011.”