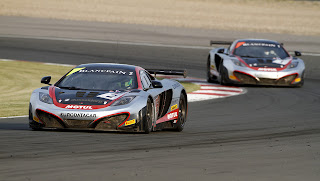 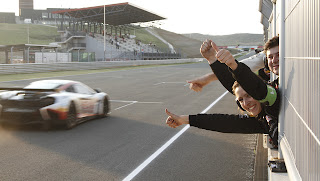 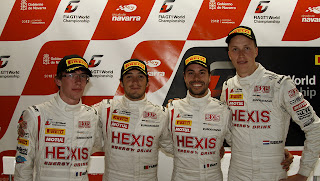 Hexis Racing McLaren make it a double at Navarra


Fred Makowiecki (FRA) and Stef Dusseldorp (NLD) in the Hexis Racing McLaren MP4-12C completed a double success at Navarra with a comprehensive win in the Championship Race.
The Hexis No.1 car’s success in the main event was every bit as convincing as the previous day in the Qualifying Race crossing the finish line 12 seconds ahead of their nearest challengers.

The double race win also enabled Makowiecki and Dusseldorp to take over the lead of the drivers’ championship.

Hexis team boss Philippe Dumas was delighted with the result after a difficult start to the season. “It is great for the team to win both races this weekend,” he said.

“We have had problems but we have fought hard to get to this point and everybody involved with the team deserves this result. My young daughter asked me to bring home the trophy and I am very happy to do it.”
The ALL-INKL.COM Münnich Motorsport Mercedes SLS AMGs were second and third – Marc Basseng (DEU)/Markus Winkelhock (DEU) leading home their team-mates Thomas Jager (DEU) and Nicky Pastorelli (NLD).

For Basseng, the key was the quick turnaround at the pit stop. “It is a great result for me as a driver and as a team manager,” he said.

“The team did an awesome job at the pit stop - that was what got us ahead of the McLaren (No.2). Then I don’t know how Thomas (Jager) held off the McLaren towards the end but he managed it and ensured we achieved the maximum result we could today as a team.”
The one-two elevates ALL-INKL.COM Münnich Motorsport to the top of the teams’ standings.