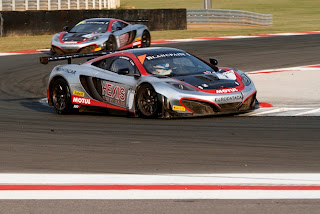 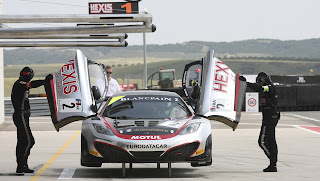 The Hexis Racing McLarens completed a stunning one-two finish in an eventful Qualifying Race at Navarra.

The No.1 McLaren MP4-12C of Fred Makowiecki (FRA) and Stef Dusseldorp (NLD) led home their stablemates Alvaro Parente (PRT) and Gregoire Demoustier (FRA) in the No.2 car. The McLarens ran away with the race after the pit stop to collect maximum points for the French outfit.

Makowiecki, who started from 16th on the grid after technical issues during the morning’s Qualifying session, said: “This is a great result for the whole team after all the troubles we have had. Everybody has been working really hard to make the car reliable and competitive.

“To finish first and second is a really nice feeling and hopefully we can continue in the same way for tomorrow’s Championship Race.”

Parente, who has been involved in a lot of the development of the McLaren MP4-12C, said: “Navarra is where we have been doing all our development and testing with the car as a team so it is a good place to get our first victory.

“We have spent a lot of hours working through some teething problems with the car but days like today make it all worth it.”

The result was a perfect riposte for McLaren who have experienced a number of technical problems in the opening two rounds of the 2012 season.

Their closest challenger, the Vita4One BMW Z4 No.18 of Yelmer Buurman (NLD) and Michael Bartels (DEU) was third – over 20 seconds adrift.

Buurman had started from the pit lane after failing to make the grid for the start. The No.18 car, which had qualified second, stopped on the circuit with a fuel issue. “After the problems we had at the start it turned out a good result for us,” Bartels said.

“Looking ahead to tomorrow, if we are not in the same area on performance as the McLarens then it is important for us to score some good points. In fact that is our goal all along for both cars - to score regularly and fight for the championship.”
The pole-sitting Reiter Engineering Lamborghini Gallardo No.25 of Darryl O’Young (CHN) and Peter Kox (NLD) finished fourth just ahead of the two ALL-INKL.COM Münnich Motorsport Mercedes SLS AMGs.