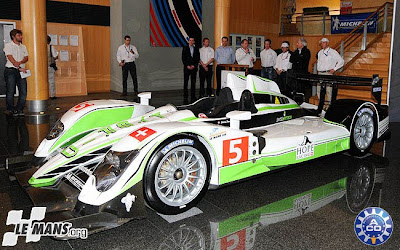 It will be driven by Steve Zacchia in Sarthe (third appearance at the 24 Hours), Casper Elgaard (eighth appearance, winner in the LM P2 Porsche RS Spyder in 2009) and Jan Lammers (22nd participation and winner in 1988 with Jaguar). This will be the first hybrid prototype for the start of 24 Hours. It is powered by a turbocharged four-cylinder Swiss Hytech engine, combined with a kinetic energy recovery system developed in England.

Unless there are any unexpected last-minute withdrawals, the entry list of the 24 Hours of Le Mans 2011 is now closed. Two cars are still in reserve: the second Ford GT of Robertson Racing and Young Driver Aston Martin Vantage of the AMR. Scrutineering will take place on the 5th June and 6th June, and the race 11th and 12th June 2011

The schedule for the week of 24 hours is HERE.