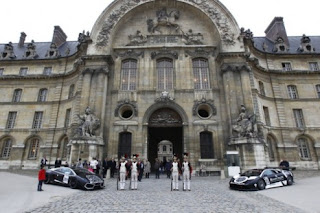 The official launch of the 2011 GT1 season was staged yesterday in the historic surroundings of the Hotel des Invalides in Paris.

Stephane Ratel, the CEO of SRO Motorsports Group, addressed over 300 guests at a press conference and cocktail reception as the FIA GT1 World Championship prepares for its second year of competition.

Teams, sponsors, drivers and VIPs including Jean Todt, the FIA President and Mark A Hayek, the president and CEO of Blancpain, gathered to hear the plans for the 2011 season.

A key compnent of the strategy for 2011 involves a new media campaign which includes a partnership with Daily Motion as the new broadband TV distributor and EA Sports which has produced Need For Speed Shift 2 which is modelled on the GT1 series. This extends the existing relationship with global broadcaster Bloomberg Television as the series aims to reach a broader and younger audience.

“After an exciting inaugural season of the FIA GT1 World Championship, we are delighted to unveil a strong line-up, in both drivers and teams, for 2011,” Ratel said.

“We are also moving into new markets, with the first GT1 World event in China in September and we are also visiting new circuits in Belgium, Germany and Brazil.

"Our strategic partnerships with Daily Motion and EA Sports will enable us to take GT1World to a whole new audience. We firmly believe that new media is the right direction for the championship."

Iconic sports car brands such as Aston Martin, Corvette, Ford, Lamborghini and Nissan will be on the start grid for the new season while Ratel confirmed that there is serious interest from at least 15 brands in total in wanting to be part of the "most exciting sports car championship in the world".

2011 sees the FIA GT1 World Championship once again take to the global stage with new teams and new challenges, with the addition of China to the list of host countries, while the German round moves to the Sachsenring and the Brazilian round to Curitiba.

The Championship will feature the most iconic and inspirational sportscar marques in the world including Aston Martin, Ford, Lamborghini and Nissan. The series will visit some of the world’s most legendary and iconic circuits. The season starts, as it did in 2010, in the United Arab Emirates on the F1 circuit at Yas Marina in Abu Dhabi.

The European leg of the championship starts in Belgium with round two at Zolder before moving to Portugal, where the teams and drivers will be tested on the challenging Algarve circuit. Then on to Germany for the first-ever visit by an FIA GT Championship to the Sachsenring, home of the German round of the MotoGP.

The British round will be at the beginning of June where the drivers will fight it out on the Silverstone GP circuit to become the latest recipients of the world-famous Royal Automobile Club Tourist Trophy.

The next round is held in Northern Spain at the brand new Navarra circuit before heading to the Paul Ricard in the South of France for the final European race of 2011. At the start of September the FIA GT1 World Championship will head east to China, to compete on the Ordos International circuit.

The season finale will once again be held in South America with Round 9 at Curitiba in Brazil before the final round of the second FIA GT1 World Championship season takes place in Argentina on the majestic San Luis circuit at the start of November.

Besides GT1, the highly-successful FIA GT3 European Championship begins its sixth season in May and continues to be the standard for all national and international GT championships. GT3 will become the first international car series to race in Russia with two rounds at the brand new Smolenskring in August.

This, along with new cars in the shape of the Mercedes AMG SLS GT3 and Ferrari 458 keeps the FIA GT3 European Championship at the forefront of European sportscar racing.

2011 also sees the launch of the Blancpain Endurance Series, an international series for GT3 and GT4 cars, with different categories ranging from amateur pairings to full professional line-ups, over four three-hour races in Italy, Spain, France and the UK and blue riband event for GT racing, the Total 24 Hours of Spa in Belgium.

SRO Motorsports Group also organises and promotes flourishing national GT Championships in Brazil, Great Britain and Germany,healthy franchises in the Netherlands and Belgium and the Cooper Tires British F3 International Series – a proving ground for future stars of Formula One.

In 2011 three new national championships have also added to the SRO portfolio with the Formula Renault 2.0 Championship and the Air Asia Renault Clio Cup in the UK and the Mercedes-Benz Grand Challenge in Brazil. A new partnership has been agreed with the Super Taikyu Series for the introduction of the GT3 category in Japan.