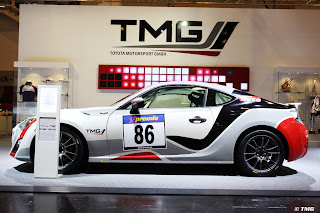 TOYOTA Motorsport GmbH (TMG) is excited to announce a new motorsport competition for 2013 based on the TMG GT86 CS-V3 race car. Running within the popular Nürburgring-based VLN series, the TMG GT86 Cup is exclusively for GT86 CS-V3 entrants and offers attractive prize money as well as the thrill of competition on the legendary Nordschleife. The GT86 CS-V3 is already a proven class-winner in VLN events and this year's prototype completed more than 7,000km of running in race conditions, with a perfect reliability record and minimal spare parts.


VLN races regularly attract over 200 entrants and the TMG GT86 Cup will run as a category within the existing championship structure, benefiting from a well-established organisation.

Together with its partner IKmedia, TMG will provide an on-site spare parts service, with special conditions for participants, as well as a dedicated TMG GT86 Cup organisation service at the Nürburgring.


Attractive prizes for race and season results totalling around €50,000 combine with the GT86 CS-V3 car, which is available for €45,815 (including German VAT), for a cost-effective way to participate in one of Europe's leading motorsport series.

The annual entry fee of €2,500 also includes additional benefits such as a TMG GT86 Cup-branded race suit, VIP hospitality packages and exclusive reductions on tyres and spare parts at the race track.


Although not part of the TMG GT86 Cup calendar, the car is eligible to compete in the Nürburgring 24 Hours in the V3 class, which was won by the prototype GT86 CS-V3 in 2012.

Yoshiaki Kinoshita, TMG President: "This is exciting news for TMG and fans of endurance racing. Thanks to the VLN organisation, Toyota Motor Europe and IKmedia for their support and assistance in establishing this new TMG GT86 Cup. It will be fantastic to watch several GT86 CS-V3 race cars competing against each other in such an established series and on a race track like the Nürburgring. We are proud of the GT86 CS-V3 as a reliable and fast entry-level race car so I am expecting close competition and plenty of real racing next season."