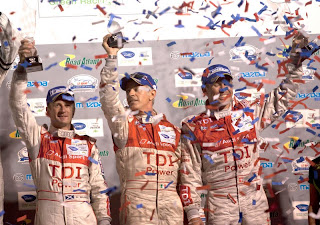 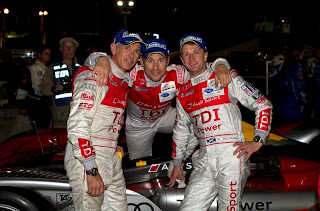 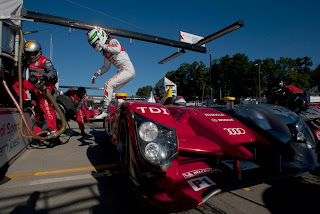 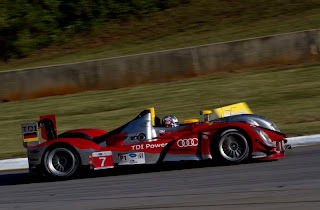 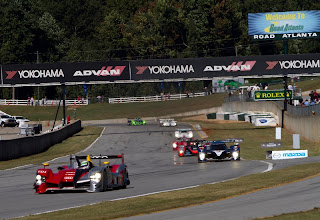 Ingolstadt/Road Atlanta, October 2, 2010 - The thrilling duel of the diesel sports cars from Audi and Peugeot had spectators watching with bated breath again at the 13th edition of the "Petit Le Mans" race at Road Atlanta (U.S. state of Georgia). For more than six hours Audi had good prospects of clinching its tenth triumph at the American endurance classic. But after an unusual incident all that remained in the end was the eleventh consecutive "Petit Le Mans" podium.

For six hours the lead kept changing between Audi and Peugeot in front of a record crowd. Dindo Capello, Tom Kristensen and Allan McNish in the car that won this year’s Le Mans 24 Hour managed to repeatedly achieve a small lead. But at 17:51 hrs (local time), exactly 6 hours and 21 minutes after the race had started, Dindo Capello, who was leading at that time, had to come in for an unscheduled pit stop because an insert in his helmet prescribed by the regulations had come loose and the fireproof balaclava started to cover his eyes. Without being able to see anything, Capello had to let the Peugeot behind him pass and head for the pits in a blind flight.

Afterwards Audi Sport Team Joest tried everything to make up the lost lap again. But the picture during the remaining hours of the race was similar as it had been before: the two Audi R15 TDI and the two Peugeot 908 cars drove comparable lap times and were running without the slightest problems so that it was impossible to recover the gap. Dindo Capello, Tom Kristensen and Allan McNish ultimately had to settle for third place.

The second Audi R15 TDI with Marcel Fässler, André Lotterer and Benoît Treluyer was running in a promising third place during the early phase of the race. Due to a small slip at the beginning of the second hour Marcel Fässler lost third place to the second Peugeot. More serious was the mistake which André Lotterer made an hour later: while attempting to pass an LMP2 vehicle in the fast "S-turns" Lotterer came off the track. Although the repair of the R15 TDI that was heavily damaged mainly at the front only took 15 laps, it caused the squad of car number "8" to hopelessly lose ground. From 21st place the runners-up of the 2010 Le Mans 24 Hours still managed to push forward to sixth place overall and fifth in the LMP1 class.

Despite the unfortunate outcome of the U.S. race for Audi the decision in the inaugural season of the Le Mans Intercontinental Cup (ILMC) will only be made at the finale at Zhuhai on November 7. Audi has a gap of 36 points in the LMP1 manufacturers’ class. A total of 48 points are yet to be awarded in China.

Dr. Wolfgang Ullrich (Head of Audi Motorsport): "Obviously, this is a great disappointment because we had a really good pace today, were leading the race several times in the first six hours and had the chance to win it. Unfortunately, a loose insert in Dindo Capello’s helmet caused us to have to make an additional pit stop which came at exactly the wrong time. We lost one lap - that was the decision."

Dindo Capello (Audi R15 TDI #7): "Up until the stupid problem with the helmet things were looking perfectly for us. We fought a fierce battle with Peugeot. It was really good fun because the car was very good to drive even in traffic. But then the nightmare started. At first I didn’t have a clue as to what was happening. I had the feeling that the helmet was suddenly three sizes larger than before. We later found out that the E-Ject insert in the helmet had come loose. I was even lucky not to have had an accident since I was completely blind in one turn because the helmet slipped across my eyes. Even after so many years you can still experience something new. I’m incredibly sorry for the team that we lost a better result due to such a mishap."

Tom Kristensen (Audi R15 TDI #7): "I think everyone will agree that the first 70 percent was a fantastic race. After our best time in the warm-up we certainly figured that we’d have good chances even though we weren’t the fastest cars on the straights. And we were right. I was leading during my stints. But then there was the mishap with Dindo’s helmet. We had to stop under green and lost a lap plus the chance of being able to fight for victory up to the end. That’s racing. I’ll just remember the first 70 percent of this race."

Allan McNish (Audi R15 TDI #7): "Petit Le Mans keeps producing exciting races. Today the fans got to see another great race. After the accident yesterday our guys did a fantastic job of rebuilding the chassis because the car was really good in the race. We were able to fight with the Peugeot cars. They were faster than us at some places and in a certain phase of the race, but the opposite was true too. Unfortunately we had to come in for an unscheduled pit stop and afterwards there were no more cautions that would have made it possible for us to make up the lost lap again. But on the whole we were completely competitive here today and probably gave Peugeot something to think about. We’ve gained self-confidence and learned more things that we’ll have to work on back home in Ingolstadt."

Marcel Fässler (Audi R15 TDI #9): "I had a good start and found a good rhythm in traffic. I saw that Allan (McNish) was a lot more aggressive, especially at the beginning. But you’ve got to develop a feeling for this first. For me the race was okay on the whole even though we were a bit unfortunate with the incidents. We’ve still got to improve some more compared with our competition. But we’ve got a good base and know where to make some adjustments."

André Lotterer (Audi R15 TDI #9): "I was surprised by the Porsche braking slightly in the valley. I had to get out of the way and got onto the dirt. I hit the curbs with one wheel and then ended up in the grass. The front of the car was pretty heavily damaged in the process. Afterwards it was relatively difficult to get away from the hill. Fortunately, I made it. The team did a great and really fast job of repairing the car so we were at least able to finish the race. Still, I’m very sorry that this happened. We would have liked to have fought for victory all the way through to the end."

Benoît Treluyer (Audi R15 TDI #9): "It was fun, I really enjoyed the track. It’s a shame that we had this problem because the car was good. All three of us were very fast and could have achieved a good result. Traffic was really heavy. Just getting off the line by 50 centimeters could spell deep trouble. The mechanics did a great job of repairing the car so well and so quickly. Our R15 TDI was just as good after the accident as it had been before. The team is really tremendous. It’s a shame it wasn’t rewarded with the result it would have deserved."

Ralf Jüttner (Technical Director Audi Sport Team Joest): "It’s really a shame for the team. After all this work it would have deserved a better result. Up to the midpoint it was a very open race. As expected, Peugeot was a little faster, but not that much. After each pit stop we came out on the track again in first place. ‘Well done’ to our squad for that too! That was a really a strong showing. It made it possible for us to keep the race open. With car number ‘9’ the crunch point of course was André’s (Lotterer) accident. That was bad. But I take my hat off to them for clinching sixth place after all. With the other car the problem was in fact Dindo’s helmet. I’ve never seen such a crazy thing happen before. Apparently, the new inflatable padding that is now required in the helmet was at fault. In any case, he couldn’t see anything anymore. From that moment forward both Peugeot cars were one lap in front of us and were able to play with both cars under the yellow flags and we couldn’t catch them any more. In the end we suffered a puncture after an incident of body contact to top it off, but that didn’t affect the result any more."