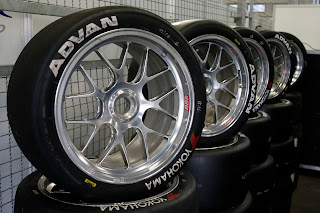 
Even before the end of this season, ADAC GT Masters exclusive tyre partner YOKOHAMA began making preparations for next year. The Japanese manufacturer is currently working flat out to develop new tyre specifications for the supercars that will be contesting the 2013 ADAC GT Masters season. Over a two-day period last week, teams and drivers from the ADAC GT Masters put the tyres through their paces on the Paul Ricard High Tech Test Track at Le Castellet in southern France.

The purpose of the tests, which took place under perfect weather conditions, was to carry forward development of new compounds for sports cars with front and mid engine. Callaway Competition brought along two Corvettes, while Mamerow Racing were represented by Chris Mamerow (27, Waltrop) in an Audi R8. The main focus of the tests at the former F1 track situated in Provence between Marseille and Toulon was on the development of slicks; on the second day, however, YOKOHAMA artificially soaked the surface to try out their new rain tyres.

"We tested various new tyre specifications on Day 1 and then picked two of them to put in a long run over a full race distance on the second day," said ADAC GT Masters runner-up Diego Alessi (41, Italy), explaining the rationale. "After the long run, we were able to supply YOKOHAMA with fairly precise information about the tyre specification for 2013." Alessi was well satisfied with the progress made. "The performance is comparable with the tyres we've been using this year; however, YOKOHAMA have been working hard on a number of issues such as getting them up to temperature, the balance between front and rear axles, and the consistency."

On Day 2, the Corvettes and the Audi tested on a wet surface. Alessi: "Trialling the rain tyres was not easy, because the grip level on the artificially watered track wasn't the same for each attempt. Having said that, though, the wet weather tyres for the coming season essentially offer more grip, especially on the front wheels, and they are more consistent. YOKOHAMA have done a very good job on the development for 2013, and these tests were very well organised from a logistics aspect."

YOKOHAMA Motorsport Manager Manfred Theisen was also well pleased with the way things had gone: "The testing was highly satisfactory. After two days of intensive work on a variety of different specifications, we have gained a number of valuable insights. We will process the feedback from the tests and define our tyre specifications for the 2013 season on the basis of what we have been told. We are definitely on the right track in the development of next year's tyres for the front and mid-engine sports cars contesting the ADAC GT Masters."

ADAC Head of Motorsport Division Lars Soutschka commented: "We will sit down with YOKOHAMA and analyse the results of the tests to see if there are any further improvements that can be made with respect to the tyre that we will be using next season. It has to suit all the teams and all the cars equally."