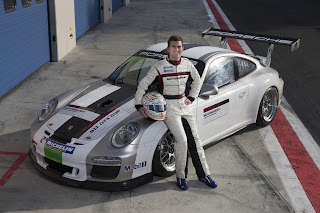 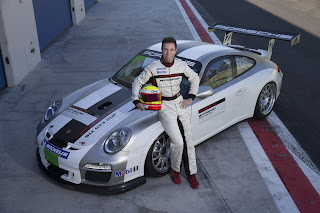 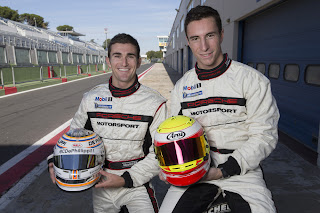 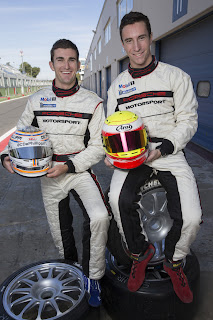 Stuttgart. Alex Riberas Bou (18) from Spain and America’s Connor de Phillippi (19) are the new Porsche juniors for the 2013 racing season. The two young hot shots, who have already achieved successes in karting and various Formula race series, will contest the Porsche Carrera Cup Deutschland in 2013. After their excellent performance this past season, the Austrian Klaus Bachler (21) and Michael Christensen (22) from Denmark will receive support from Porsche again in 2013 as Porsche Juniors competing in the Porsche Mobil 1 Supercup. Porsche supplies the four rookie drivers with the bulk of their budgets and provides coaching for the talented youngsters on and off the track.

In an extensive selection process, Alex Riberas Bou and Connor de Phillippi came out on top against young pilots from all over the world. Factors taken into account were fitness, mental strength and technical understanding. At the finale on the race track in Vallelunga (Italy), the best six candidates had to prove they could work alongside engineers, drive consistent times over a race distance as well as underline their speed in qualifying laps on fresh tyres.

“The decision was a very exciting one,” says Porsche Head of Racing, Hartmut Kristen. “The finalists were all on an impressive level. In order to select the two candidates with the greatest potential, our engineers carefully examined every single lap. Both Alex Riberas Bou and Connor de Phillippi have the talent necessary to be successful in the sports car scene and to follow in the footsteps of Klaus Bachler and Michael Christensen. Our current Porsche works drivers have shown that the Carrera Cup is an excellent platform for a professional international career.”

The Porsche Juniors themselves will choose the teams with whom they want to contest the Carrera Cup Deutschland. On and off the track, the pilots receive assistance similar to the internationally successful Porsche factory drivers. Fitness tests with constantly adapted training plans as well as media coaching and sponsor obligations are also part of the programme.

Alex Riberas Bou comes from Barcelona in Spain. As a child he initially played soccer for FC Barcelona, and then went on to secure his first successes in kart racing at the age of 13. In 2010, he switched to the Formula Renault 2.0 Eurocup and immediately pocketed second in the rookie classification. For the 2011 and 2012 seasons, he established himself as one of the top drivers in the highly competitive Formula series. Aside from soccer, motocross, trial, skiing and squash, the Spaniard is an avid fan of historic Porsche vehicles.

“My biggest dream has come true. I’ve always been a huge Porsche fan,” says the 18-year-old junior pilot. “Although I’ve only raced karts and Formula cars until now, I immediately felt at home at the wheel of the Porsche 911. I can’t wait for the 2013 season and the things I will learn over the winter months from Porsche and my future team.”

Connor de Phillippi lives in the Californian town of San Clemente south of Los Angeles. He began racing karts at the age of five and over the course of the next nine years he notched up 21 national championships. In 2008 he made the jump to Formula racing. Straightaway, he secured the title in the Skip Barber West Coast Series and became champion of the Skip Barber National Championship in 2009. In 2010 the American with Italian roots took the next step on the career ladder and concluded the Formula Star Mazda series ranking third overall. 2011 yielded him vice-championship honours followed by third overall in 2012. Not surprisingly, the dark-haired Californian coast resident loves wake boarding and body surfing in his spare time. On land, Connor de Phillippi keeps himself in top shape on the bike and snowboard.

“It’s unbelievable to now be a part of this programme,” says de Phillippi. “It’s a huge step for me to now race in Europe. But as everyone knows, there is no better school in GT racing than to pit yourself against the top specialists in the Carrera Cup Deutschland. Porsche works driver Patrick Long also took this route. He is one of my biggest role model. I hope to be his teammate one day.”

Klaus Bachler and Michael Christensen now move into the second stage of the Porsche junior support programme concept. For next season, the pair is promoted to the Porsche Mobil 1 Supercup as support to Formula 1. Bachler concluded his maiden season in the Porsche Carrera Cup Deutschland ranking eighth in the championship and secured a podium result at his home race in Austria. Christensen claimed third place on the Lausitzring and crowned his season with a victory at the finale in Hockenheim. This earned the Dane seventh place in the championship.

“I’m very pleased that Klaus Bachler and Michael Christensen quickly earned their stripes in the Carrera Cup Deutschland,” says Hartmut Kristen, Head of Porsche racing. “Both show huge potential and are following the path that we had hoped for in our Junior Programme. Their learning curve is steep. I’m certain they will also enjoy success in the Porsche Mobil 1 Supercup.”