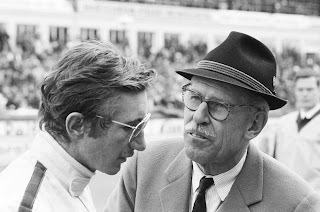 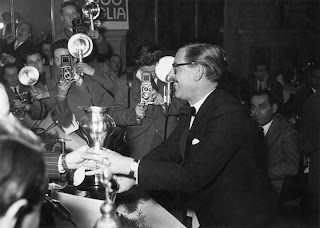 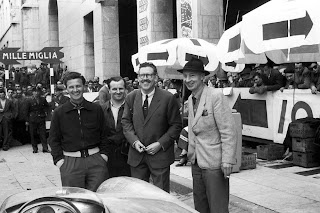 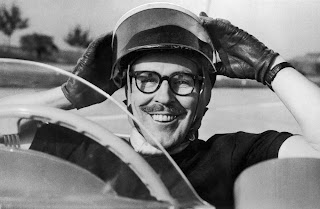 Fritz “Huschke“ von Hanstein would have been 100 years old

Stuttgart. 3 January 2011 would have been the 100th birthday of Fritz “Huschke“ von Hanstein, one of the greatest personalities in the company history of Dr. Ing. h.c. F. Porsche AG, Stuttgart. As Press Director, racing manager, and a racing driver, from 1952 to 1974 Huschke von Hanstein helped fashion the unique image of the brand name Porsche. As Sports President of the AvD, the German Automobile Club, President of the Supreme National Sports Commission (ONS), and as Vice-President of the International Automobile Sport Association (FISA), he also represented German motor sport and the Porsche name to the entire world.

Born in Halle, the son of a nobleman and major entrepreneur, after passing the final school examination, the Abitur, Huschke von Hanstein became one of the most successful racing drivers of the pre-war period. He competed in his first motorcycle event in 1929, the ADAC Time Trials Event, while he was still a student of business studies in Hamburg. He pressed ahead with endurance events over the next few years on motorcycles from FN, Ardie, BSA, and Norton, but soon switched to four wheels, and scored success after success all over Europe as a works driver with Hanomag, Adler, and BMW, in endurance events, hill events, and circuit competitions. From 1936 he was already a regular competitor in the legendary Le Mans 24-hour race, and two years later became German hill events champion with a BMW. In 1940 von Hanstein scored a huge success in the substitute Mille Miglia event, when he led the German national team to overall victory with a BMW 328.

After the war, he initially continued with his motor sports activities with own-build VW sports cars, before coming in contact with Porsche in 1950 by way of introduction from the former Auto-Union Racing Manager Dr. Feuereisen. By September 1951 he was already a member of the Porsche drivers team, which set 17 world records at Montlhéry. A year after the “Montlhéry Adventure“, Huschke von Hanstein took on the dual role of Racing Manager and PR Director at Porsche. During the ‘fifties and sixties which followed, the baron played a key part in shaping the sports style of the still young House of Porsche. As a manager and driver he not only entered European events such as Le Mans, Targa Florio, Giro di Sicilia, and the classic Lüttich-Rome-Lüttich endurance contest, but also helped boost the image of the young company of Porsche all over the world by racing appearances in the USA, Mexico, Venezuela, and in the Bahamas.

With the bearing of a man of the world and self-assured elegance, matched with a gift for rhetoric and mastery of many languages, Huschke von Hanstein achieved a great reputation in the automobile world. Together with his wife Ursula he was renowned as the perfect host, and the soirées at his house in Stuttgart’s Kräherwald district were legendary. As an ambassador for the brand name, he not only represented Porsche to the international media, he was also an honoured guest at countless international Porsche Club gatherings.

As a leading sports official, Huschke von Hanstein was closely linked to Porsche as a company even after his departure, and remained so to the end of his life. He died on 5 March 1996, and takes his final rest next to his father Carlo von Hanstein in the cemetery at Wahlhausen. In homage to this famous member of the company, the Porsche Museum keeps one of Huschke von Hanstein’s service vehicles on permanent display. The dark green Porsche 356 A 1600 S Coupé with its cream-coloured interior still bears witness today to the good taste of the legendary “Racing Baron“.

Info and Fotos Porsche Motorsport/Autorized and Acreditation Press.
Posted by AmigosRacing/MRS GT. at 11:17