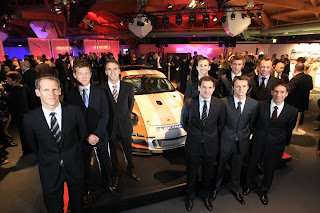 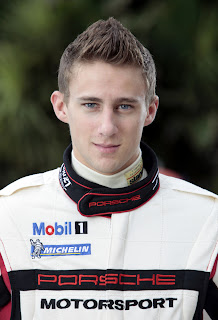 As part of the “Night of Champions” season-closing celebration in the R&D Centre at Weissach, Wolfgang Dürheimer, Board Member for Research and Development, praised the excellent performance of the Porsche works drivers: “Aside from the technology of the vehicles and the performance of the teams, our pilots contributed significantly to the huge success that we achieved in 2010. They are the ones who had to make the right decisions within fractions of seconds and deliver their best performances in our cars over many hours.”

Two Porsche factory pilots received special distinctions in the 2010 season. Timo Bernhard, the first to win the world’s four major long distance races and hence the Motorsport Grand Slam, was selected by a jury of experts as the ADAC Race Driver of the Year. Richard Lietz, who won the GT2 classification at the Le Mans 24 Hours as well as the championship title of the Le Mans Series, received the Austrian Race Driver of the Year award by the Austrian Motorsport Association committee (OSK).

In his speech, Dürheimer stressed the special role of motorsport for the future of the automobile: “Right now, motor racing has the historic chance to take the lead in important technological advances. Fielding the Porsche 911 GT3 R Hybrid, we have shown how you put crucial ground-breaking technology to the test with success on the race circuit. We will continue to determinedly blaze a trail and we believe that sooner or later other manufacturers will follow suit. But to do this you need courageous and visionary rule-makers who recognise this opportunity and, in conjunction with manufacturers, implement the new challenges in a clear, stable and long term system of regulations.”

Furthermore, Dürheimer applauded the impressive career of the RS Spyder sports prototype. After a total of 12 championship titles, 13 overall and 35 class victories in the American Le Mans Series, the Le Mans Series and at Le Mans, the RS Spyder programme was concluded as planned.

Matthias Müller, Chairman of the Executive Board of Porsche AG, accentuated the special position in international customer sport: “30,000 racing victories, more than 500 teams throughout the world and over 2,000 units of the 911 GT3 Cup produced – such numbers are unparalleled anywhere on earth. Every Porsche carries racing genes. And these genes will also be present in the Porsche models that we develop in the future. Because these vehicles are the basis for the race cars that will bring home victories in the future in the hands of our customer teams worldwide.”