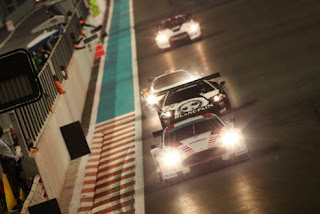 The 2011 calendars for the FIA GT1 World and FIA GT3 European Championships have been announced by the FIA World Motor Sport Council and SRO is pleased to unveil the five dates for the brand-new Blancpain Endurance Series, which will include the Total 24 Hours of Spa in July.

After a highly successful first season the 2011 FIA GT1 World Championship will begin, as it did in 2010, in Abu Dhabi at the end of March.

As well as the event in the United Arab Emirates, the events in Algarve, Silverstone, Navarra, Paul Ricard and San Luis are all carried over from the inaugural season.

The four new tracks for 2011 include Zolder (Belgium), Sachsenring* (Germany) and Curitiba (Brazil), with the GT1 World Championship heading into new territory in September with a race in China, at the Ordos International Circuit.

The addition of China underlines the GT1 series' foray into world’s fastest growing markets for luxury and sports car manufacturers. Russia is on the itinerary for GT3, paving the way for a GT1 presence in 2012.

Stephane Ratel, CEO of the SRO Motorsports Group, said: “Today we have unveiled the calendars for the three leading international GT series in the world. 2010 saw the FIA GT1 World Championship become a reality and we are very proud of the exciting racing that the teams and drivers produced as we travelled to the Middle East, Europe and South America.

"In 2011 we will build on the solid foundations of the first year and with a race in Asia. China is a very important market and another step in our long term strategy that will eventually see the FIA GT1 World Championship race on every continent.”

The FIA GT3 European Championship will be held over 12 races on six circuits, including three which are new to the championship.

The first four events will be held with the FIA GT1 World Championship in Portugal, Great Britain, Spain and France before the final four races, where GT3 will be the headline series.

Rounds 9 and 10 will be held in Russia for the first time on the new Smolensk circuit in Western Russia, while the finale will be staged in the Netherlands for the first time, with two races at Zandvoort in October.

Ratel added: “The GT3 European Championship continues to provide a great platform for drivers, teams and sponsors. Racing on the same events as the GT1 World Championship gives the GT3 teams access to a far greater audience.

"We also want to give this championship its own events and the inclusion of a race in Russia and the Netherlands is a good way to finish the sixth season of the GT3 European Championship.

"Like GT1 in China, Russia is a very important market for us and the GT3 event at Smolensk is the first step in what will hopefully be a long-term relationship.”

The brand new Endurance Series, which was announced by Ratel at Spa in July, is being sponsored by Swiss watchmaker Blancpain and will feature five races centred around the blue riband event of GT racing, the Total 24 Hours of Spa in July.

The events at Monza (Italy), Navarra (Spain), Magny Cours (France) and Silverstone (Great Britain) will feature three-hour races and will be for GT3 and GT4 cars.

“The Endurance Series is brand new for the 2011 season and we are very pleased to have the support of Blancpain," Ratel said. "The races will be longer than the 60-minute events in GT1 and GT3 and the calendar features three current F1 circuits, as well as a former one.

"With the Blancpain Endurance Series we are providing longer events that will cater for those drivers and teams that prefer this type of racing while still providing the shorter, more spectator and TV friendly 60-minute format in the FIA GT1 World and FIA GT3 European Championships.”