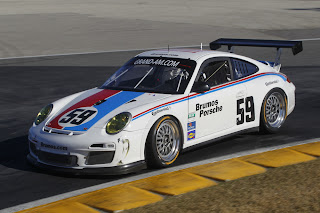 Stuttgart. Title defender Porsche tackles the Daytona 24 hour race on 29 January with a strong contingent. Traditionally, the long distance classic in Florida is the first highlight of the motorsport season and each year attracts the best pilots from a huge range of international race series to the Sunshine State of the USA. With 22 overall wins, Porsche is the most successful manufacturer in the history of the race on the Daytona International Speedway, where this time seven Porsche factory drivers will compete for customer teams.

The 24 Hours at Daytona has been run on the Daytona International Speedway in Daytona Beach/Florida since 1966. Lining up on the grid are Daytona prototypes and GT sports cars. The chassis for the prototypes are supplied by specialist manufacturers like Riley. To ensure equal chances, major automobile manufacturers are only permitted to supply engines. This race, as the season-opener to the American Grand-Am Series, has been won by Formula 1 greats like Lorenzo Bandini, Chris Amon and Jacky Ickx as well as US racing legends like Mario Andretti, A.J. Foyt and Al Unser.

With its 12 corners, the 5.729 kilometre Daytona International Speedway is one of the most famous race tracks in the USA. The 24 hour race is contested on a combination of the oval with banked corners and the infield. The circuit is also the venue for the famed NASCAR Daytona 500 race with over 250,000 spectators annually.

In the prototype class, Porsche works driver Joerg Bergmeister (Germany), who saw the flag here in 2003 as overall victor with the Porsche 911 GT3 RS, shares driving duties with his works driver colleague Patrick Long (USA). Their Porsche-Riley, powered by the ca. 500 hp Porsche six-cylinder engine, is the winning Daytona Prototype from 2009 and is fielded by Flying Lizard Motorsports, the successful Porsche customer team from the American Le Mans Series. Their teammates are Americans Seth Neiman and Johannes van Osterbeek. Two Riley-chassis with Porsche V8-engines are run by Action Express Racing with last year’s winners Terry Borcheller (USA) and Joao Barbosa (Portugal), as well as 2009 winners David Donohue, Darren Law and Buddy Rice from America. Five Porsche works drivers have their sights set on victory in the traditionally fiercely-contested GT class with the Porsche 911 GT3 Cup: Marco Holzer (Germany) and Richard Lietz (Austria) compete for Magnus Racing, Patrick Pilet (France) races for the TRG/Black Swan Racing/GMC Racing squad, Wolf Henzler (Germany) for TRG Racing. Marc Lieb (Germany) gets to drive with a legendary teammate for the Daytona winning team Brumos Racing, which swaps from prototypes to the GT class this year: Hurley Haywood (USA) is the most successful pilot by now in Daytona with five overall and six class wins. On 4 May he celebrates his 63rd birthday. Also manning the 911 GT3 Cup is former Porsche-Junior Martin Ragginger (Austria), two times winner of the Porsche Mobil1 Supercup Jeroen Bleekemolen (Netherlands) as well as the reigning Carrera Cup Germany champion Nicolas Armindo (France).

Joerg Bergmeister: “I’m feeling very optimistic. The Porsche engine and the Riley chassis go well together. We tested the car in Homestead and Daytona and made great progress there. By the race, the team will be more familiar with the new car and that increases our chances.”
Patrick Long: “With Flying Lizard Motorsports we have one of the best sports car teams backing us, that’s for sure. Our Daytona test helped us a great deal. It makes me confident for the race, also because we’re competing with a chassis-engine combination that has already won at Daytona. It won’t be easy but we are well prepared.”
Marc Lieb: “I last drove in Daytona in 2004. Back then we won the GT class. After such a long break I’m very much looking forward to returning to this fascinating race and to racing for such a time-honoured and successful team like Brumos Racing.”
Wolf Henzler: “Daytona is a real highlight to start the season. The great thing is that you come up against many good drivers from other race series. I won my Daytona debut in 2005 and have come back to race here ever since. Now it’s high time for my second victory.”
Marco Holzer: “I can’t wait for my first race as a Porsche works driver. And it’s even better that it takes place at Daytona. To start the season with such a classic is a great challenge. I really like this track. It’s demanding, but it’s also great fun.”
Richard Lietz: “Great that the season’s finally starting. I’m looking forward to working with Marco Holzer. We worked very well together at the Nürburgring 24 hour race. Magnus Racing is a very professional team. Of course we don’t know how strong the opposition is, but we definitely want to bring home a podium result.”
Patrick Pilet: “I have very special memories of Daytona. In 2008 I drove my first race for Porsche here and right before the start I learned that I would be getting a works contract. That was a huge moment of my career. I can’t wait for the race – in fact I just love racing in the USA. I enjoy the whole buzz, it’s somehow very different and much more exciting than in Europe.”
Hartmut Kristen, Head of Porsche Motorsport: “This race right at the start of the season is a huge challenge for our teams and drivers. It’s particularly appealing that drivers from many different race series come together on neutral ground in Daytona. It’ll be especially exciting to see how our customer team Flying Lizard Motorsports goes out to bat in the prototype class.”

With 22 overall and 72 class victories, Porsche is by far the most successful manufacturer in the history of the Daytona 24 hour race. The first overall win for Porsche was in 1968 with Vic Elford, Jochen Neerpasch, Rolf Stommelen, Jo Siffert and Hans Herrmann with the Porsche 907. The last win in 2010 went to Joao Barbosa, Terry Borcheller, Ryan Dalziel and Mike Rockenfeller with the Porsche-Riley. In 2003, Jörg Bergmeister, Timo Bernhard, Kevin Buckler and Michael Schrom clinched a sensational overall win with the near-standard Porsche 911 GT3 RS against more powerful Daytona prototypes.

On the 2011 calendar of the Grand-Am Series are these twelve races in the USA and Canada: