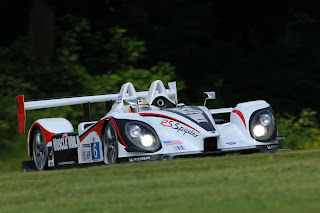 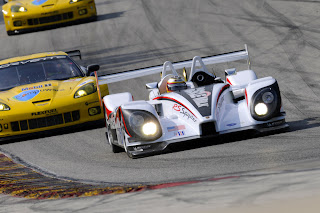 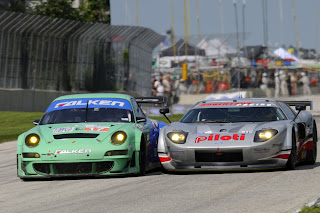 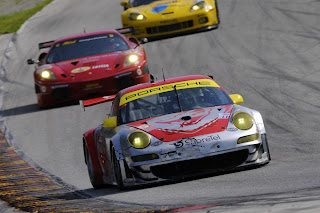 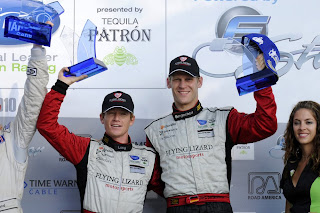 Stuttgart. A successful weekend for Porsche in the American Le Mans Series: On the legendary Road America, Porsche works drivers Joerg Bergmeister (Germany) and Patrick Long (USA) claimed second place with the Porsche 911 GT3 RSR and duly extended their points’ lead. In the LMP class, Porsche works driver Timo Bernhard (Germany) and his compatriot Klaus Graf missed out on victory with the Porsche RS Spyder by just one second. Porsche’s success at round seven of the race series featuring the world’s fastest sports cars was made perfect with victory in the Michelin Green X Challenge environmental classification. The 911 GT3 RSR with Porsche factory pilot Wolf Henzler (Germany) and Bryan Sellers (USA) was the vehicle with the best overall efficiency in its class.

The finale on the 6.514 kilometre classic race track in Elkhart Lake, Wisconsin, was packed with excitement and drama. With an inspired drive at the wheel of the Flying Lizard Motorsports 911 GT3 RSR, Patrick Long fended off fierce charges from his pursuers to secure crucial points with Joerg Bergmeister towards the title. The pair not only defended their points’ lead, but also managed to extend it further. The outcome was incredibly tight: The Porsche works driver saw the flag a mere two and a half seconds ahead of the third placed vehicle – and just two and a half seconds off claiming their fourth win of the season.

“That was without doubt the toughest hour I’ve ever experienced on a race track,” declared Patrick Long. “At the restart after the last safety car phase we were in the lead and it was tough seeing how the BMW overtook on the outside on the finish straight. But I had to stay totally focussed, after all I had some of the world’s best sports car pilots breathing down my neck. It was very difficult keeping them at bay and at the same time chasing the leader. I’ve never driven such a crazy line like in this last hour of racing. Non-stop full-tilt. We fought for every inch. I’ve never been so happy to finish second, but there is always a first time. Today was such a day. We are all over the moon about this result.”

His teammate Joerg Bergmeister, who has notched up four victories in Elkhart Lake over the years, was in full agreement: “With second position we’ve extended our lead in the points and I’m certain we’re going to need every point we can get in the fight for the title,” he said. “I lost several places at the start, as some of our rivals were quicker on the straights. I managed to make up several of the positions, because after the first pit stop our car ran really well. Our team also contributed to gaining some positions with their brilliant pit stops today. These boys did a fantastic job.”

The pressure in the LMP class was even more intense, with Klaus Graf and the RS Spyder from Muscle Milk Team Cytosport gunning to what looked like a secure third win of the season in the final race laps. But with three corners to go to the finish, the winning racer from Weissach, with which his teammate Timo Bernhard celebrated a total of 16 victories and two title wins in the American Le Mans Series between 2006 and 2008, ran out of fuel. The Porsche pilots, who had joined forces for the first time, had to settle for position two – beaten by a mere second.

“We tried to survive the last 30 minutes without refuelling and to save fuel where we could,” said Klaus Graf. “The two safety car phases helped but we were aware it wouldn’t be easy to keep the strong Lola behind us. If the fuel had lasted the distance we would have won. But in the third to last corner our car suddenly lost power and I just made it over the finish line. Despite missing out on this victory we could still become champions. And that is a great situation to be in with two races to go.”

For Timo Bernhard, his return to the American Le Mans Series with the RS Spyder was a one-off guest appearance. “Normally it’s difficult to work with a new team for just one race weekend, but the crew from Muscle Milk Team Cytosport made it easy for me. I felt great from the very first moment,” said the 2010 Le Mans winner. “The race didn’t run so well early on. The quicker cars edged past me on the straight. Afterwards I was able to match their pace and despite a slight oversteer I even moved up the field to second place by the time I came in to pit. The driver change ran as smoothly as the pit stops and we gained another position through the super work of our crew. Even if we didn’t win I think that whole team can be proud of their effort.”

At the wheel of the second Porsche 911 GT3 RSR fielded by Flying Lizard Motorsports, Darren Law (USA) and Seth Neiman (USA) saw the flag in ninth – one spot ahead of Wolf Henzler and Bryan Sellers. The Team Falken Tire still had good reason to celebrate: For the first time, their 911 GT3 RSR won the Michelin Green X Challenge as the vehicle with the best overall efficiency. Jeroen Bleekemolen (Netherlands) and Timothy Pappas (USA) brought home another win: The reigning Supercup champion secured his fourth win of the season in the GTC class with his Porsche 911 GT3 Cup.

Round 8 of the American Le Mans Series takes place on 29 August in Mosport/Canada.

The American Le Mans Series (ALMS) was created in 1999 for sports prototypes and GT vehicles. The regulations correspond to those of the Le Mans 24 hour race. Nine races in the USA and Canada make up this year’s calendar. Traditional highlights are the Sebring 12 hour race and the 1,000 mile “Petit Le Mans” at Road Atlanta.

Sports prototypes and standard sports cars make up the starter field: These are divided into four classes:
LMP class: In this category, sports prototypes from the former LMP1 and LMP2 classes are classified together. The difference in performance is intended to be offset as far as possible (e.g. via restriction adjustments). The Porsche RS Spyder competes in this class.
GT class: Contesting this class (formerly GT2) are slightly modified standard sports cars with 440 to 460 hp and a minimum weight of 1,125 – 1,325 kilograms (e.g. Porsche 911 GT3 RSR).
LMPC class: This newly-created class is a prototype brand trophy series for the ORECA FLM 09.
GTC class: Replacing the ALMS Challenge, this class is open for various model years of the Porsche 911 GT3 Cup.

All race cars start together but are classified separately. This ensures racing that is exciting and constantly changing. Points are awarded only for placings in each class.
Press Porsche.
Posted by AmigosRacing/MRS GT. at 11:00