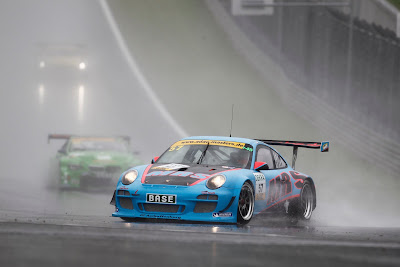 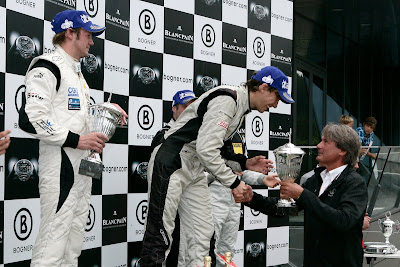 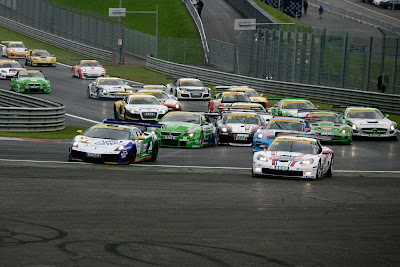 Siedler / Engelhart to make the Red Bull Ring all wet
Porsche victory at Austria-premiere of the ADAC GT Masters.

The Austria-premiere of the ADAC GT Masters at the Red Bull Ring
brought after a rain battle two surprise winners. The
Austrian Norbert Siedler (28) and Christian Engelhart (24, Kösching / D),
in the Porsche 911 of the MRS Team PZ Aschaffenburg in Austria for
first time in the "league of supercars' baffled competed in
the pouring rain with a comfortable victory. Place two filled
Local hero Andreas Zuber (27, Judenburg / A) together with Lance David
Arnold (25, Duisburg / D) in the Mercedes-Benz AMG SLS HEICO
MOTORSPORT before Christopher Haase (23, Kulmbach / D) / Andreas Simonsen
(21, S) in the Audi R8 by Phoenix Racing Pole Promotion.
Keyfacts, Red Bull Ring, Austria
Circuit length: 4,326 meters
Weather: At the start, dry, and later heavy rain, 17 degrees
Winner: Norbert Siedler / Christian Engelhart (MRS Team PZ Aschaffenburg
911)
Fastest race lap: Christian Engelhart, 1.41,832 min
Perfect start of Engelhart lays foundation stone for victory
The first race was at the Austria-premiere of the ADAC GT Masters
differently, especially leader Ferdinand Stuck (20, Austria)
presented. Although the Lamborghini Reiter pilot won from pole position
from the sprint to the first corner. But already at the end of the first round
Christian Engelhart took over the Porsche after a brilliant start by
Six leadership position. Already in the second round had Engelhart
less a persecutor in the rearview mirror, as stucco after his Lamborghini
had to park a contact with a competitor. Engelhart set
slightly off, and settled not by the strong onset of the rainy
to impress the broke after 20 minutes on the track and the
Red Bull Ring was transformed into a skating rink. After a perfectly timed
Pit stop to change drivers went back to wets Norbert Siedler
back on track and finally presented with flawless ride and 19.3
Seconds ahead of the first Porsche victory of the season before Zuber / Arnold sure.
"We have before the race, given the threat of rain with a bit of
Voting gamble. It paid off. The wetter it got, the
Porsche was the better, "Engelhart said the secret of success.Settler
praised the strong drive of his teammates: "Christian has in the first
Half of the race laid the foundation for victory. I never knew I was in
Lay leadership. Only ten minutes before the end of the race I have on radio
asked and could not believe I such a big lead
have. "
Local hero Zuber podium debut with the ADAC GT Masters
Andreas Zuber / Lance David Arnold drove despite a spectacular high-
Speed ​​trip through the gravel trap by Zuber and meadow for the first time this
Season on the podium. "It was so wet on the track, that even on
the lines could not really step on the gas, "said Zuber, the extremely
difficult circumstances. These felt, however, the duo Christopher
Haase / Andreas Simonsen throughout their element. After a furious
Chase of the grid 24 secured the two Audi drivers with strong
Ride in the final phase for the last spot on the podium in front of the MS
RACING Mercedes-Benz of Florian Stoll (30, Rickenbach / D) / Thomas Hunter
(34, Munich / D) and the ABT Audi R8 Mies Christopher (22,
Heiligenhaus / D) and Luca Ludwig (22, Bonn / D)
Stuck-brothers and ALPINA duo tied at the top
Unfortunately for the brothers from the stucco-runners so far benefited
Alexandros Margaritis (26, Cologne / D) and Dino Lunardi (32 F) in the BMW ALPINA
B6 of LIQUI MOLY Team Engstler. According to sixth place in race
Second, the previous table are now level on points at the top with
Ferdinand and John stucco.
Rain caused a commotion in the entrance to pit lane
Treacherous, the pit entry was just before the Plichtboxenstopps.In the
rain-soaked driveway turned a variety of vehicles, even with the
slicks were traveling in heavy aquaplaning. Inter alia
the leader in the amateur championship, Marc A. Hayek (40, CH), and
Ski legend Sven Hannawald (36, Munich / D). "I have extra to
the guardrail can be modeled and slide along, just so I could one
Dreher avoid, "said the second-placed Arnold, as the difficult
Situation mastered.
Oliver Mayer wins the Mercedes SLS in the amateur standings
Kept a cool head and Oliver Mayer (53, Ingolstadt / D). After
flawless journey of the Mercedes driver from the team celebrates the Black Falcon
second win in the amateur standings and closed it to
Leader Marc A. Hayek, who was seventh in the amateur standings.
Swen Dolenc (43, Maulbronn / D) finished in the Porsche 911 of CAR SPECIALIST
TECH second place before Ardi van der Hoek (34, NL) in the Audi R8 from Prosperia
Brinkmann team uhc.
Thomas Hunter starts from pole position in race two on Sunday
In the second race on Sunday for the first time a Mercedes SLS starts from the
Pole position. Thomas Hunter captured the pole position in gullwing
MS Racing, ahead of Michael Ammermuller (25, Pocking) in-a-workx Akapovic
Porsche 911 Starting from fourth place is former Formula 1 driver Heinz-Harald
Frentzen (44, Düsseldorf) in a Callaway Corvette hunting for points.
All 16 races of the FIA ​​GT Championship will again in 2011 by free
air TV stations kabel eins on Saturdays and Sundays 11.45 clock
broadcast live in Germany, Austria and Switzerland. The
Sports channel SPORT1 sends the ADAC GT Masters Highlights from Red Bull
Ring in the ADAC Masters Weekend magazine on 20 August at 13.00 clock.