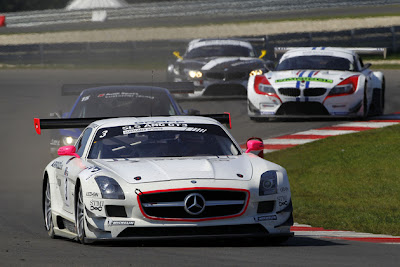 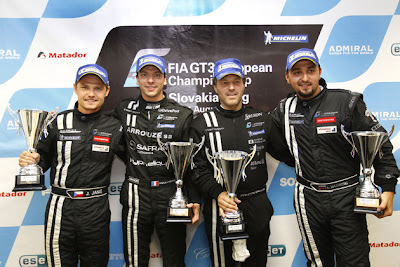 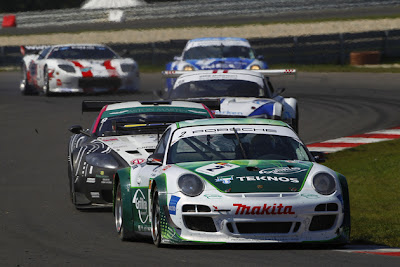 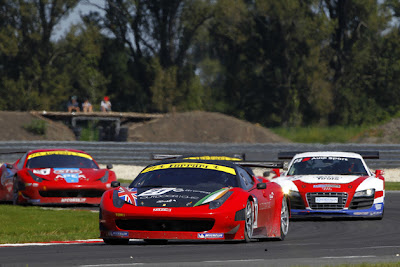 Philippe Giauque and Mike Parisy gave Mercedes a perfect weekend when they won Round 10 at the Slovakia Ring in the nr3 Graff Racing Mercedes Benz SLS AMG. Giauque brought the car home in front of the nr11 Gravity Charouz Racing Mercedes Benz of Jarek Janis and Leo Machitski, with the Russian driver having to defend his second place from Csaba Walter in the nr7 Need for Speed Team Schubert BMW Z4, the Hungarian securing his and Claudia Huertgen's second podium finish of the weekend.


Stefan Rosina led the 27 car grid from pole position in the nr25 Reiter Engineering Lamborghini into the first corner, with Jarek Janis in the nr11 Gravity Charouz Mercedes in 2nd ahead of the nr50 AF Corse Ferrari of Francesco Castellacci. Castellacci kept pace with the Czech Merc and on lap three the Italian swept past into 2nd place on the run into the first corner.

At the front Rosina had opened a two second gap and now Castellacci started to pull away from Janis as the Czech driver now had Mike Parisy's Graff Racing Mercedes filling his rear view mirrors. Further back Dino Lunardi in the Sainteloc Racing Audi was challenging Nick Catsburg in the nr36 Faster Racing BMW for 5th place. After several attempts Lunardi finally passed the BMW on lap 4.

The two leading cars were pulling away from the rest of the field, with Rosina still holding a 3.5 lead over the AF Corse Ferrari when disaster struck. On lap 10 the Reiter Lamborghini suffered a left rear puncture and had to limp back to the pits. This left the door open for Castellacci but the Italian's chances of winning evaporated on the same lap when the Ferrari spun off into the gravel. Castellacci recovered the car to the pits but by then they were one lap down and out of the points.

This promoted Jarek Janis into the lead of the race as the pit window approached, closely followed by Mike Parisy in the nr3 Graff Mercedes and the nr15 Sainteloc Audi of Dino Lunardi.

The pit window opened on lap 13 and the leaders came in 3 laps later to change tyres and drivers. However the nr11 Mercedes, now with Leo Machitski behind the wheel, had to be pushed back by the mechanics as it was too close to the car in the next pitbox. This lost the Russian driver precious seconds and he emerged from the pitlane in 4th place behind the nr3 Graff Racing Mercedes of Philipp Giauque, the nr36 Faster Racing BMW of Harrie Kolen and the nr9 Team LMP Aston of Gael Lesoudier. Machitski only took one lap to pass Lesoudier and then was promoted to 2nd when Kolen went off the track, rejoining in 5th place and then losing a further place to Paul van Splunteren in the nr1 Prospeed Porsche.

At the front Giauque was holding a comfortable 6 second lead but Machitski was slightly faster than the Swiss driver. Meanwhile Csaba Walter was making up places in the nr7 Need for Speed Team Schubert BMW, moving up to 3rd place by lap 18 and then closing the gap to the nr11 Gravity Charouz Mercedes.

While Machitski and Walter battled for 2nd place the leading car was able to maintain a comfortable gap but it was diminishing as the clock counted down the final few laps. Walter kept the nose of his BMW firmly glued to the rear of Machitski's Mercedes but the Hungarian driver couldn't find a way past the Russian as he defended every corner and used the Mercedes power to pull away on the straights. The battle allowed the nr35 Faster Racing BMW of Hoevert Vos to close up but not close enough as the chequered flag came out for Philippe Giauque to takes his first FIA GT3 victory and the first for Mike Parisy and Graff Racing in the Mercedes Benz SLS.

The win has propelled Mike Parisy and Philippe Giauque into second place in the Driver's Championship with 83 points, 14 points behind championship leaders Francesco Castellacci and Federico Leo. With 50 points on offer for the final two races in Zandvoort in October there are 20 drivers still with a chance of taking the 2011 title. In the Team's Championship Need for Speed Team Schubert are on 158 points, 19 points ahead of nearest rivals Faster Racing by DB Motorsport with two races remaining.

The final event of the 2011 season will take place at Zandvoort in The Netherlands on 14-16 October when the FIA GT3 European Championship will be decided.

CLICK HERE for the provisional Championship Positions following Round 10

Mike Parisy: “I did a very good start with my car. Afterwards I tried to keep up with Janis’ rhythm. I think I was faster but it was very difficult doing the fast corners with the aero effect of the two cars. I tried to keep my tyres for Philippe. I’m very happy and proud for Graff Racing and Mercedes, because we’ve got our first victory since the start of the year, and it’s a great pleasure for us to win a race in FIA GT3; the level is very hard, and Graff and Mercedes have done a very good job, so my thanks to them. The team spirit is very good and a very good job. I hope that we can fight for the championship now. We were 9th in the Championship yesterday, we’re 2nd now. We lost 3 potential victories since the start of the year, we’ve had a lot of problems, but we’re going well now. I hope we continue to work well with the team and I’m crossing my fingers.”

“I found the track very nice, because it has quite fast corners, we can be artists as well. There are slow parts...the track is very interesting for the team and for us drivers. It’s a very good track, and I’m very happy to come here in this country, because last year I won in Brno, and I’ve now won in Slovakia, so I think I’m going to live here now.”

Philippe Giauque : “It’s good to be here finally on top of the podium. This track’s good, but then all tracks are good. I’m not going to think about the championship now though, but just think about the next races. I’m going to take it easy.”

Jarek Janis: “It’s better not to talk about the pit lane...We probably lost the possibility to win the race in the pits, because unfortunately one of the BMW parked in front of us and we were stuck, and when we were on time to move, we couldn’t, because the BMW was in front of us, so we had to pull back, and then we lost about 5 or 7 seconds, and the lead, but we finished second, and I’m very happy with that, because as I said after qualifying, the beginning of the season wasn’t very good and we had to find the right setup, because we were really struggling at the beginning. So I have to say thanks to the teams and the engineers, because we prepared a really good car, and yesterday was a payback for the Graff car’s race, because yesterday we had a little accident with them, and today, they won, so I’m very happy for them, because it wasn’t on purpose to kick him off, but unfortunately that happened. That’s racing. I’m happy that we’re here on the podium and I’m happy for Leo that we got the car to the podium together. He did a really good job, he was very constant. I was a little bit worried about the BMW because it was putting pressure on him, but he managed to control it, and brought it home in 2nd. It’s great for us to win here, as it’s so close; we have a lot of Czech fans coming to see the race, so it’s even better for us, and really good that we score high points and we’re on the podium when we’re so close to home. Let’s hope it continues like this in the last race. We’ll see.”

Leo Machitski: “I’m very happy to be here. I want to thank the team, they’ve done a really good job. I want to thank Jarek, he did an incredible job in qualifying. I had a little bit of a difficult start to this weekend, and made many mistakes in testing: I hit the wall, I hit another Mercedes in race 1, absolutely by accident and I went to apologise yesterday. Clearly, the racing gods decided to sort everything out and gave them the victory today with the pit stops, and I want to congratulate them, the team and say thank you to all the fans who were here, because this was a great warm welcome to Slovakia. The BMW was much stronger in the tight, slow corners than the Mercedes, but the Mercedes is the heaviest car on the grid. For me, my strategy was to slow him right down in the slower corners and to use the power of the big engine to pull away, and high speed was okay. I raced in Zandvoort in 2005, and it’s a really nice circuit.”

Claudia Huertgen: “We came here and have been on the podium twice, which is fine. The team worked very hard these last few days, it was also because we changed the tyres for this event, so we’ve had a lot of work, so for us it’s really nice for us to be on the podium twice. It was a good start; I could control the speed, and tried to save the tyres as well, because I knew that we could really drive fast at the end. So I just saved the tyres and brought the car back to the pits in a good condition, and Csaba could continue. Here we cannot beat the Mercedes, but I think Zandvoort will be very interesting, because the track it’s closer, you have a long straight line, but on the other side, we’ll be very fast. It’ll be interesting because Zandvoort is like here, it’s a driver track, so we’ll see.”

Csaba Walter: “It was very difficult. For us, we were a bit disadvantaged from our result yesterday, because we had to stand in the pits for 5 seconds longer, and these 5 seconds were very long, because several cars came in front of us because of this. After that, I started to overtake them, and for a while it was quite good, but when I reached the guys in front of me, I started to struggle a bit with the tyres. I tried to push a bit and keep the pressure on him, but he wasn’t kind enough to make a mistake. Otherwise, here at this track, it’s not so easy to overtake with our car. It’s a very good result, and I would like to thank all the Hungarians who came here. We also had a flag in the tribunes and I have a lot of friends and fans here, and I would like to thank them and the team as well, because the car was perfect again.”

Championship Positions after Round 10 (Provisional)

NOTE: The results from rounds 9 & 10 of the FIA GT3 European Championship in Slovakia remain provisional due to the fact that two engines have been selected for testing and will be inspected before the next event in Zandvoort.