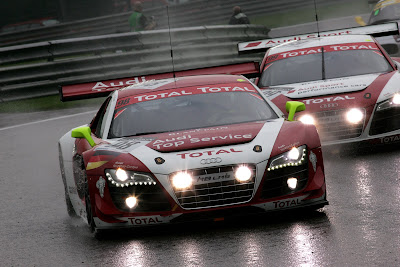 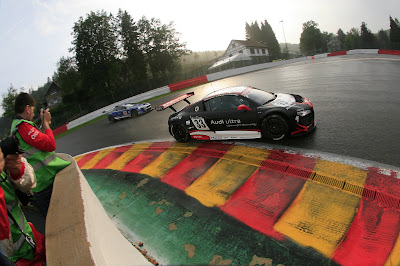 24h Spa: Two Audi R8 LMS in the top ten
􀀁 Rain causes turbulent qualifying at Spa-Francorchamps
􀀁 Grid only decided just before midnight
􀀁 Mattias Ekström fastest in the rain and best Audi driver
Ingolstadt/Spa, July 29, 2011 – Qualifying for the 24-hour race at Spa-
Francorchamps (Belgium) provided a foretaste of what the spectators could well
expect on Saturday and Sunday: a fascinating exchange of blows between the
world’s best GT3 sportscars in which the result is completely unpredictable.
As is so often the case at Spa-Francorchamps the fickle Ardennes weather played a
decisive role during Thursday’s qualifying. Rain showers repeatedly swept across the
circuit. Rain tires were de rigueur during the first of two qualifying sessions. In the
third and final session the track dried out in the closing minutes.
With 62 cars representing 13 different brands an extremely close fight developed
for the best grid positions just before midnight around the 7.004 kilometer long
circuit. Qualifying was interrupted twice by the red flag in the hectic closing stages.
In the end, the drivers at the front were the luckiest in heavy traffic on the rapidly
drying track who found a clear lap.
After the Audi R8 LMS had dictated the pace with the fastest lap on a dry track
during free practice in the morning and again in first qualifying on the wet track, the
Audi drivers were unlucky in the crucial final minutes of qualifying. Filipe
Albuquerque (Audi Sport Team WRT #32) spun off into the barriers when the circuit
was still wet. In the end he had to sit and watch as he tumbled from second to 43rd
position. Team mate Mattias Ekström (Audi Sport Team WRT #33), who had
recorded the fastest time in the rain, jumped from the midfield to seventh in a last
gasp effort and was the fastest Audi driver as a result. Mike Rockenfeller (Audi Sport
Team Phoenix #98) and Marc Basseng (Audi Sport Team Phoenix #99) held fourth
and seventh before the final red flag, they were unlucky in traffic in the final seven
minutes after the restart and must be satisfied with tenth and 13th grid positions.
“It goes without saying that the end of qualifying wasn’t to our taste,” explained
Head of Audi Motorsport Dr. Wolfgang Ullrich. “You needed plenty of luck and this
is something we definitely lacked. Furthermore, our position in the pits was a
disadvantage today because after the red flags we had too many cars in front of us.
However, the grid positions for a 24-hour race are not so critical. It’s important that
collected a lot of experience today and saw that our R8 LMS sportscars handle well
and are fast on both a dry and wet track. Both of our teams will do their utmost to
ensure that things run better in the race than they did in the final minutes of
qualifying.”
The three Audi R8 LMS fielded by customer team United Autosports start the race
from 30, 35 and 52 on the grid. The 63rd running of the Spa 24 Hours starts on
Saturday at 4 p.m. local time. Sport1 broadcasts seven hours live from Spa, Motors
TV 12.5 hours. Audi fans can follow a non-stop live stream of the race on
www.audi.tv on Saturday from 3 p.m. (CEST).
The starting grid at Spa
1 Martin/Leinders/Hennerici (BMW) 2m 24.488s
2 Goossens/Heylen/Soulet (Porsche) 2m 24.735s
3 Roda/Giammaria/Ruberti (Porsche) 2m 26.713s
4 Hayek/Kox/Merten (Lamborghini) 2m 26.807s
5 Westbrook/Menzel/Stursberg/Riegel (Porsche) 2m 26.952s
6 van Splunteren/Miller/Sougnez/de Crem (Porsche) 2m 27.195s
7 Ekström/Franchi/Scheider (Audi R8 LMS) 2m 27.842s
8 Gerber/Griffin/Cadei/Cioci (Ferrari) 2m 28.262s
9 Parisy/Vannelet/Haezebrouck/Vignall (Mercedes) 2m 28.355s
10 Fässler/Piccini/Rockenfeller (Audi R8 LMS) 2m 28.573s
...
13 Basseng/Haase/Stippler (Audi R8 LMS) 2m 29.250s
30 Dean/Brown/Herbert/Johansson (Audi R8 LMS) 2m 34.216s
35 Patterson/Bell/Cheever/Blundell (Audi R8 LMS) 2m 35.543s
43 Albuquerque/Longin/Ortelli (Audi R8 LMS) 2m 38.997s
52 Luyendyk/Li/Meins/Richard (Audi R8 LMS) 2m 44.720s
Audi Sport.
Posted by AmigosRacing/MRS GT. at 13:04