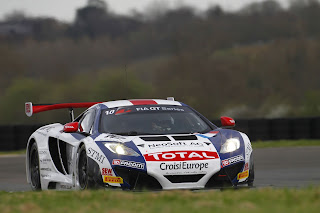 Pit notes from Friday at Nogaro
The hugely anticipated FIA GT Series roared in to life at Nogaro in South west France today with 24 GT3 cars taking to the track in dry but then increasingly wet conditions.
Sebastien Loeb Racing topped the times in the 80-minute session this afternoon with the #10 Sebastien Loeb Racing McLaren, in the hands of Mike Parisy (FRA) setting the fastest lap of 1m27.573s. Parisy, racing on home turf, as he lives close by in Pau, is partnered by Austrian, Andreas Zuber (AUT) this season.
In the #9 Sebastien Loeb Racing McLaren MP4-12C, Sebastien Loeb (FRA) and Alvaro Parente (PT) were next fastest. The 9-time World Rally Champion is entering his first full season in racing and started his first FIA GT Series weekend well as his McLaren ended the session just under two-tenths of a second behind the sister car.
In 3rd place was the Belgian Audi Club Team WRT entry of Frank Stippler (DEU) and Edward Sandstrom (SWE). The Audi R8 LMS ultra is one of three cars entered by the Belgian team this season in an impressive commitment to the FIA GT Series.
Leading the Pro-Am class and a highly creditable 4th overall was the Portuguese team, Novadriver, in their Audi R8 LMS ultra. Carlos Viera (PT) set a time just half a second shy of the outright pace and along with team boss and co-driver Cesar Campanico (PT) was very pleased with the way they started the season.
In the Gentlemens Trophy class, 1998 World Cup hero and now SOFREV Ferrari FIA GT Series driver, Fabien Barthez (FRA) topped the times along with team mate Gerard Tonelli (FRA) and was immensely satisfied with 16th overall.
The track action at this traditional Coupes De Pâques starts again tomorrow morning with Free Practice 2 at 10.05 cet before the 24 cars get set for qualifying which begins at 15.15. Q1 will be 15 minutes for all cars with the nominated Driver 1, while Q2 will be another 15 minutes for all cars with the nominated second driver. The fastest 10 cars from the combined qualifying of Q1 and Q2 will go into the nail-biting Superpole session to set the top 10 places for Sunday afternoons Qualifying Race before the Main race on Monday.

Quotes from the pitlane

Mike Parisy, #10 Sebastien Loeb Racing McLaren MP12-4C
“It was a good start for us and the car felt great under me right away. It was a shame that the rain came because there is a lot more time to be had out there for sure. We have more work to do and we have to stay modest. The potential is really high for us.”
Cesar Campanico, #14 Novadriver Audi R8 LMS ultra
“This first practice was good for the team. Of course we had to start on new tyres so we never know how much we are pushing or not. We raced here last year and the car seems to be quicker so it is a great base to start.
“In the beginning I was a bit surprised but I am happy because it means that we have a good base to work from and hopefully tomorrow we can improve more. Our aim is to be on top of Pro-Am but we will see, it is too soon yet. "
Fabien Barthez, #31 SOFREV ASP Ferrari 458 Italia
“A nice session for us and the team. We ran our planned programme and both Gerard and myself are pleased. It is always a pleasure to race here at Nogaro and we are looking forward to seeing many fans here to support us.”
For live text commentary of all sessions please click on to www.twitter.com/FIAGTSeries and follow #EasterGT
FIA GT Series/SRO
Posted by AmigosRacing/MRS GT. at 08:18