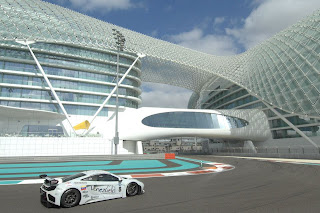 On the wonderful Formula 1 race track, on Yas Marina Island in Abu Dhabi, last weekend the „Gulf 12 Hours Race“ took place, a race for GT3 sports cars, which has been hold in two sections, each six hours. The MRS team one of the party with a McLaren MP4-12C, where the MRS driver Philipp Eng shared the work behind the steering wheel with two Amateurs from Venezuela. For Ferando Baiz and Justino Azcarate the McLaren as well as the track were something completely new, what took some time to adapt themselves.

That the MRS McLaren once again was one of the fastest car on the track, Philipp Eng showed already at the qualifying, when he drove the second best GT3 lap.

The first race section went as expected for the troupe from Lonsee; without any problems the drivers took their laps up, with good pit stops and constant lap times the MRS McLaren drove forward to the eighth place. After a forty-minute maintenance break, the second section of the race started. From the beginning the MRS McLaren convinced with very good lap times and was on the rise. After a total time of nine hours the very good performance of the MRS team came to a sudden end. Turning onto the start finish line Justino Azcarate lost the McLaren and crashed into the barriers. So the race, which went until then without any problems, was over for the MRS team.

Karsten Molitor (team leader): „Of course we are a little disappointed, but we were very good during the race. At the end a sixth place would has been possible, which was not really predictable with this driver combination Pro / Am / Am. Most of the other teams had two professionals in a car. We are very proud of our new members, the progress was unbelievable good, both did an excellent job. Also the McLaren convinced, during the race we did not have any little technical problem with the car. Unfortunately race accidents are part of our sport; nevertheless we are proud of what we were able to show. Thank you to the whole team, everybody did a great job.”